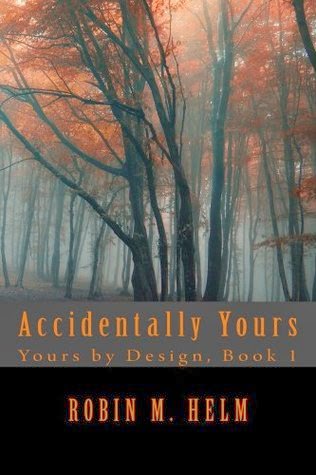 Two worlds . . .Two centuries . . .Two men who love the same woman . . .Two prayers fervent enough to shift time . . .What would a man give for a second chance at love?What would he sacrifice to keep it?
What if the proud, arrogant Fitzwilliam Darcy of Jane Austen’s Pride and Prejudice never changed after his disastrous proposal to Elizabeth Bennet at Hunsford?What if the humbled man who successfully courted her was not the same Mr. Darcy?
In Accidentally Yours, Book 1 of the Yours by Design Christian fantasy romance series, the lives of two men are turned upside down when both of them fall in love with the same woman.
Book Review:
What if there were two Darcys separated by time and in love with the same person?  What an intriguing concept and way to tell the same story with a surprising twist.

First we have the proud, and some would say arrogant, man Mr. Fitzwilliam Darcy. He is deeply hurt by Miss Elizabeth’s rejection and thusly wrote her a letter explaining his actions. Having just delivered his letter, he rides away from her as fast as he can, praying he never has to see her again, then everything goes dark. Second we meet a modern day Mr. Will Darcy who loves all things Austen and especially loves Pride & Prejudices and thusly longs to meet his very own Miss Elizabeth. His love of Austen comes from his most beloved grandmother, Nana Rose. Unfortunately, Nana Rose is very ill and her death leaves him alone and feeling lost. After a rather uneventful lunch date, Will is walking back to his office praying to meet his Elizabeth soon day soon, when his world goes dark. When the two wake, they realize that they have switched places, both having suffered some kind of accident.

From here we see how Mr. Fitzwilliam Darcy handles our modern day traditions while trying to hold onto some his 18th century traditions. He has to come to terms with his disastrous proposal and knowing that his prayer was answer in that he will never see his Elizabeth again. Luckily for him he has the Darcy’s trusted housekeeper Mrs. Thomas and Will’s best friend, Lance. Whereas Mr. Will Darcy must, with the help of Colonel Fitzwilliam, learn the customs of the 18th century and figure out a way to win the heart of Miss Elizabeth. He must also learn how to run Pemberley while trying to sort out the books at Rosings; which seem to be in some sort of disorder; all the while building a relationship with his new sister, Georgiana.

I loved how this story explains the sudden changes in Darcy that will inevitably change Elizabeth’s heart; it is a totally new Darcy. Both Darcys have much to learn about life and love not just from each other but also in those around them. They are different given the times in which they were born, but they have so much in common. As the story unfolds, we learn that these two Darcys are related and were known to the Austen family. Is this the way a young Jane Austen came up with idea of Pride & Prejudice to start out with? Maybe.  It was also nice to have stronger Jane Bennet; someone that will not cave in when Mr. Bingley comes back into her life. This time around he has competition in the way of Colonel Fitzwilliam.

Although Ms. Helm’s story follows along with the original, it is very intriguing and captivating. Cannot wait to read book two and see how the rest of the story unfolds.

Author Robin Helm is generously offering ONE (1) ebook copy of Accidentally Yours to an international winner and ONE (1) paperback or ebook copy of Accidentally Yours to one U.S. winner!!
To enter:
Please comment on this review WITH an email address or Twitter handle
For extra entires, tweet this review and leave a comment with your tweet address.
Giveaway ends April 2!
Posted by Unknown at 7:50 AM

Email ThisBlogThis!Share to TwitterShare to FacebookShare to Pinterest
Labels: Accidentally Yours, review, Robin Helm, Yours by Design