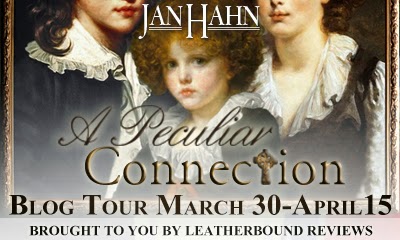 Hello dear readers! I am here to bring you some thrilling news today: Jan Hahn has released yet another novel! A Peculiar Connection is Hahn's fourth novel and is one you don't want to miss! Reviews are coming in, and readers seem to be loving this one as much as her others!

Want to find out more about A Peculiar Connection? Make sure you stop by Jan Hahn's blog tour, which starts tomorrow (schedule below)! There will excellent excerpts, guest posts, and giveaways! See you there! 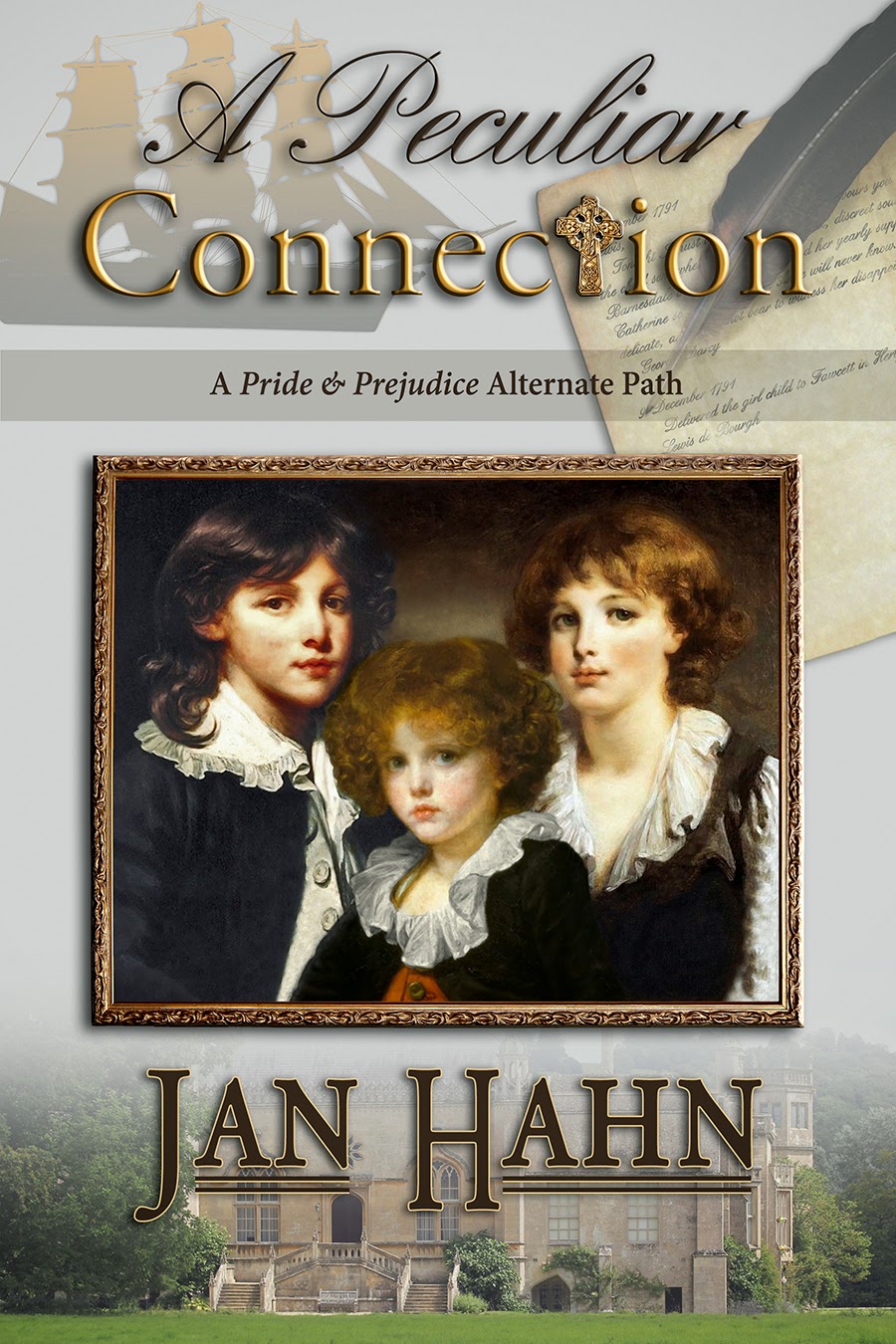 Book Blurb:
Will a mysterious note from the past doom the love of Jane Austen’s most beloved couple? A Peculiar Connection begins near the close of Jane Austen’s Pride & Prejudice. Bent on preventing the engagement of her nephew to Elizabeth Bennet, Lady Catherine de Bourgh declares that any union between Fitzwilliam Darcy and Elizabeth would be “a sin against Heaven itself!” Her shocking revelation, along with a cryptic message written over twenty years earlier, thrusts the couple into a whirlwind of heartbreak and disbelief. Could a deserted mansion in Derbyshire or a small church hidden in the wood hold the key to solving the puzzle? And why is Elizabeth inexplicably drawn to the portrait of three young boys in Pemberley’s gallery? Determined to confirm or refute Lady Catherine’s accusation, Darcy and Elizabeth are forced to embark upon a twisted trail into bygone days and family secrets. All the while, they must endure the exquisite torture of denying the indisputable desire that still hovers between them.

You can also read an exclusive excerpt from chapter three of A Peculiar Connection at Austenprose.
*******

Aerendgast: The Lost History of Jane Austen by Rachel Berman 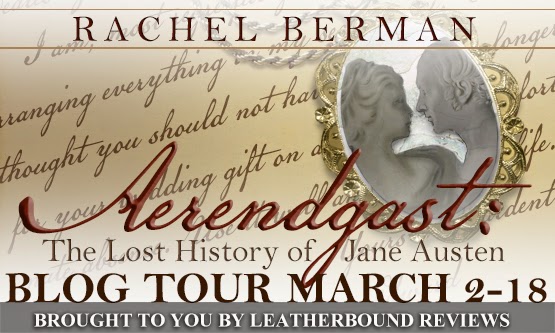 I always enjoy when authors weave known pieces from Jane Austen's life into their stories while filling in the unknown gaps with their own hypothesis. Author Rachel Berman does just this in her debut novel, Aerendgast: The Lost History of Jane Austen. Berman takes Austen's heartbreak at having loved and lost and gives readers an exquisite tale of mystery and romance while interlacing the past and present.

I am pleased to announce Meryton  Press has put together a blog tour for Aerendgast. I hope you stop by and enjoy the exceptional excerpts and entertaining and enlightening guest posts that Rachel Berman has prepared for her tour. 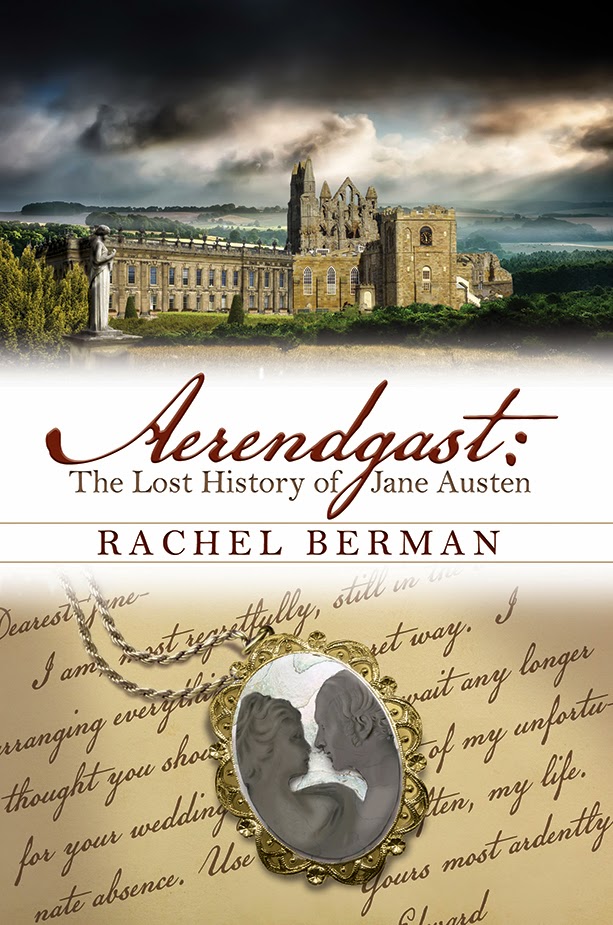 Book Blurb:
Violet Desmond has just learned from her dying grandmother that the life she’s been living is a lie.
Left with only a locket, a newspaper clipping, and a name–Atherton–Violet sets off to discover her hidden personal history.  Simultaneously, the London academic begins to have vivid dreams in which a woman from the past narrates her life story involving the same locket, a secret marriage, and a child. A story intimately connected to Jane Austen.
Violet reluctantly agrees to receive help from cavalier treasure hunter, Peter Knighton. Blacklisted from his profession, Knighton can almost taste the money and accolades he’d receive for digging up something good on Austen; the locket alone is unique enough to be worth plenty to the right collector. It would be enough to get his foot back in the door.

The unlikely pair begin a quest for answers that leads them to Aerendgast Hallows. Knee-deep in hidden crypts, perilous pursuits, and centuries-old riddles, Violet must put her literary expertise to the test as she battles to uncover the secret that her loved ones died trying to reveal, before an unknown enemy silences her as well.

The Secret of Pembrooke Park by Julie Klassen & Giveaway!

I am pleased to announce today's blog post. It is stop along the Secrets of Pembrooke Park by Julie Klassen blog tour, organized by lovely Laurel Ann Nattress of Austenprose.

Award winning historical romance author Julie Klassen tours the blogosphere February 16 through March 2 to share her latest release, The Secret of Pembrooke Park. Twenty-five popular book bloggers specializing in historical and Austenesque fiction will feature guest blogs, interviews, book reviews and excerpts of this acclaimed gothic Regency romance novel. A fabulous giveaway contest, including copies of all of Ms. Klassen’s eight books and other Jane Austen-themed items, is open to those who join the festivities.

Abigail and Mr. Chapman rode home together in the gig. Abigail was very aware of being alone with a man—a man she found increasingly attractive. Though she wondered if she would have found him quite so attractive had Gilbert not disappointed her.

It was late, but the moon shone brightly, and she could see Mr. Chapman’s profile quite clearly. His straight nose, his firm, fair cheek. The waves of auburn hair falling over his ear, and his long, sculpted side-whiskers.

Perhaps sensing her scrutiny, he glanced over at her. “Did you enjoy yourself?” he asked.
“I did. And you?”

“Yes. More than I dared hope.”

She wasn’t certain what he meant but wished he would keep his eyes on the road so she could study him unobserved.

He turned the horse back toward Easton. As they passed through the sleepy hamlet, he slowed the horse to a walking pace. Candles flickered in the public house and a few other windows, but otherwise the street was quiet, shops closed, people abed for the night.
Leaving the hamlet, he clicked the horse to a trot, but the wheels hit a deep rut. The gig lurched and she swayed, knocking into his arm. Instinctively, he slid the reins into one hand and threw his other around her shoulders to steady her. “All right?”

She swallowed, self-conscious in his embrace. Self-conscious about how much she liked the warm security of his arm around her, her side pressed firmly to his. “Ye-yes. Fine.”
He removed his arm and she shivered, whether from his nearness or the night air, she wasn’t certain.

“You’re cold,” he observed. He halted the horse right there on the road and tied off the reins. He dug under the seat and pulled forth a folded wool blanket.

“You’re not fine. You’re shivering. You females and your thin muslins. It’s a wonder you don’t all freeze to death.”

He draped the blanket around her and settled it on her shoulders, his hands lingering. “Better?”

“Yes, except now I feel guilty that you are freezing.”

“Then sit close to me and I shan’t notice anything else.”

Her gaze flew to his—saw his crooked grin, the playful sparkle in his eye. Sitting close as they were, their faces were very near. His breath was warm and smelled of cinnamon. Or perhaps that was his cologne. Whatever it was, it was spicy and masculine and made her want to lean nearer yet.

The horse stamped his hoof impatiently, no doubt eager to return to his stall and feed bucket.

She did not purposely move closer to him, but as the rock and sway of the carriage brought them nearer together, their shoulders brushing and occasionally their knees, she did not pull away, nor attempt to keep a proper distance between them. She did not want him to freeze, after all, she told herself, knowing all the while it was schoolgirl logic Louisa might have used to justify flirting with a man, but at the moment, not caring. It was dark, and they were alone, and dash it, it was cold. She liked the man, and she trusted him enough to know he would not take advantage of any of those factors. At least, not inappropriate advantage.

When they reached Pembrooke Park, Mr. Chapman tied off the reins and alighted from the gig. Coming around, he reached up, but instead of offering one hand to her, he lifted both. She hesitated, meeting his gaze with brows raised in question.

His gloved hands hovered near her waist. In reality, she could have managed the step down with only a hand to assist her, but she pressed her lips together and silently nodded.
He grasped her waist and gently lifted, lowering her easily to the ground. For a moment longer, his hands remained, and he murmured, “You do have a tiny waist.”

His hands felt large, strong, and sure. She swallowed nervously. Uncomfortable standing there so close to him, yet in no hurry to step away.

Behind him, the front door opened, and he released her. Glancing over, she saw Duncan standing in the doorway, candle lamp in hand.

With a rueful smile, Mr. Chapman offered his arm. Abigail placed her gloved hand on his sleeve and he tucked it into the crook of his elbow. Together they walked to the house.
“You two were out late,” Duncan observed, his eyes narrowed. In suspicion, or disapproval?

“The dinner party was quite a long affair,” Mr. Chapman said, coming to her defense.
Abigail added, “I didn’t realize we would be back quite so late. Thank you for waiting up.”

Book blurb:
In the spring of 1818, twenty-four-year-old Abigail Foster fears she is destined to become a spinster. Her family’s finances are in ruins and the one young man she truly esteems has fallen for another woman — her younger, prettier sister Louisa.

Forced to retrench after the bank failure of Austen, Gray & Vincent, the Foster family optimistically pool their resources for another London Season for her sister in hopes of an advantageous alliance. While searching for more affordable lodgings, a surprising offer is presented: the use of a country manor house in Berkshire abandoned for eighteen years. The Fosters journey to the imposing Pembrooke Park and are startled to find it entombed as it was abruptly left, the tight-lipped locals offering only rumors of a secret room, hidden treasure and a murder in its mysterious past.

Eager to restore her family fortune, Abigail, with the help of the handsome local curate William Chapman and his sister Leah, begins her search into the heavily veiled past aided by unsigned journal pages from a previous resident and her own spirited determination. As old friends and new foes come calling at Pembrooke Park, secrets come to light. Will Abigail find the treasure and love she seeks...or very real danger?

About the author:
Julie Klassen loves all things Jane—Jane Eyre and Jane Austen. A graduate of the University of Illinois, Julie worked in publishing for sixteen years and now writes full time. Three of her books have won the Christy Award for Historical Romance. She has also been a finalist in the Romance Writers of America’s RITA Awards. Julie and her husband have two sons and live in St. Paul, Minnesota.

Win One of Four Fabulous Prizes 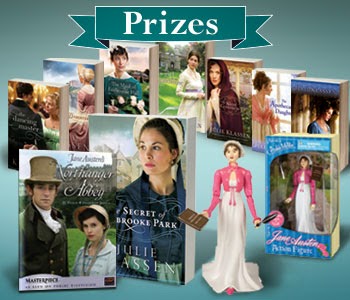 In celebration of the release of The Secret of Pembrooke Park, four chances to win copies of Julie’s books and other Jane Austen-inspired items are being offered.

Three lucky winners will receive one trade paperback or eBook copy of The Secret of Pembrooke Park, and one grand prize winner will receive one copy of all eight of Julie’s novels: Lady of Milkweed Manor, The Apothecary's Daughter, The Silent Governess, The Girl in the Gatehouse, The Maid of Fairbourne Hall, The Tutor’s Daughter, The Dancing Master, and The Secret of Pembrooke Park, one DVD of Northanger Abbey (2007) and a Jane Austen Action Figure.

To enter the giveaway contest, simply leave a comment on any or all of the blog stops on The Secret of Pembrooke Park Blog Tour starting February 16, 2015 through 11:59 pm PT, March 9, 2015. Winners will be drawn at random from all of the comments and announced on Julie Klassen’s website on March 16, 2015. Winners have until March 22, 2015 to claim their prize. The giveaway contest is open to residents of the US, UK, and Canada. Digital books will be sent through Amazon or Barnes & Noble. Good luck to all!