Excerpt & Interview: The Idea of Him by Holly Peterson 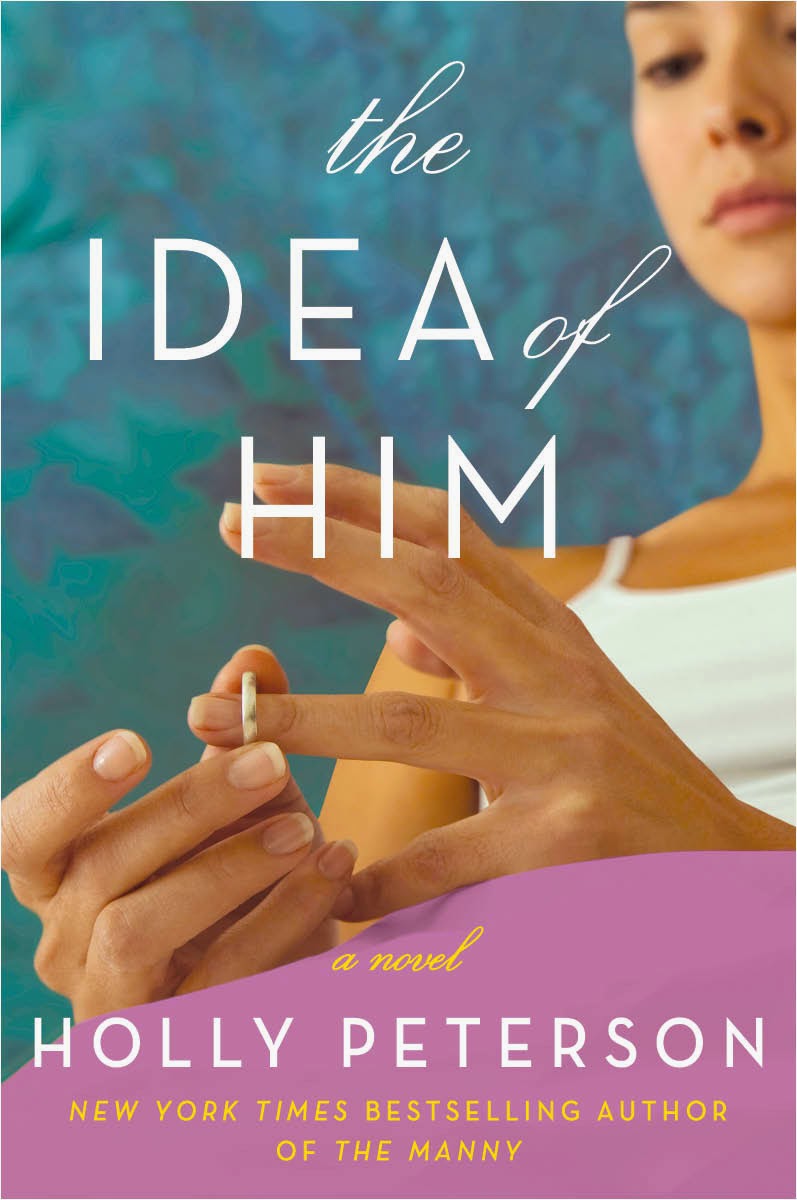 From the New York Times bestselling author of The Manny—a vibrant novel of love, life lessons, and learning to trust yourself
Allie Crawford has the life she always dreamed of—she's number two at a high-profile P.R. firm; she has two kids she adores; and her husband is a blend of handsome and heroic. Wade is everything she thought a man was supposed to be—he's running a successful newsmagazine and, best of all, he provides the stable yet exciting New York City life Allie believes she needs in order to feel secure and happy.
But when Allie finds Wade locked in their laundry room with a stunning blonde in snakeskin sandals, a scandal ensues that flips her life on its head. And when the woman wants to befriend Allie, an old flame calls, and a new guy gets a little too close for comfort, she starts to think her marriage is more of a facade than something real. Maybe she's fallen in love not with Wade—but with the idea of him.
Captivating and seductive, told in the whip-smart voice of a woman who is working hard to keep her parenting and career on track, The Idea of Him is a novel of conspiracy, intrigue, and intense passion—and discovering your greatest strength through your deepest fears.

Excerpt (from chapter 28 "Simmering Situations"):
My heart ached as if Tommy were the love of my life and I’d just this very instant lost him—neither of which was remotely true. However, a woman in a failing marriage who is hanging onto the idea of some secondary guy, and what he will do to save her, feels crazy enough to flail herself all over the nearest train tracks Anna Karenina-style. Believe me, I know. That’s exactly where I was that night.
*******

Why did you write this book?

I wanted to write about the phenomenon of falling in love with the “idea” of someone versus the reality of the actual person across the dinner table from us. I think it’s something we all have done. Once we are in a relationship, sometimes we delude ourselves into being happy, yet something doesn’t feel quite right. When reality hits, we must confront our fears of being on our own, and that can be frightening. Our fears of being on our own often propel us into staying with the wrong person.

I know I’ve personally fallen for the “idea” of someone numerous times because I have an idea in my head of what I want that person to be and how I’ll feel with him: the cool guy with the long hair will make me cool, the stable, appropriate guy will make me feel safe…I even fell for a Frenchman over how his cashmere blazer felt on my cheek! All that stuff doesn’t count in the end: the only thing that matters in my mind when it comes to love is an accompanying true friendship and deep intimacy.

You’re a journalist who’s worked at ABC News and written for magazines like Newsweek. How does that come into play when you’re writing fiction?

I am trained journalist by trade first and foremost. When I write a fictional scene, everything must be real and believable and accurate or it doesn’t feel right. That’s the joy of writing social satire in fiction. It’s all real, but it’s all so funny.

A friend of mine told me that fiction gets you closer to the truth because you don’t have the constraints of journalism when writing it. As a reporter, you often don’t have access to dinner parties or events or your interview subject doesn’t say the quote clearly and you are constrained by your access and sound bites.  In fiction, you can write the living room cocktail party, go into the bedroom, relay the conversation in a totally realistic way that is technically very truthful and that is very liberating for me.

The main character in The Idea of Him is a hard-driving businesswoman with two young children, and she struggles to balance her home life with her career. Is that a struggle that came from a real place?

What woman doesn’t struggle with work, home, and family? Even women who don’t have a “paying” job work hard in a zillion ways that aren’t financially recognized: they maintain the value of the family’s home investment, help local charitable and religious institutions, and keep their neighborhoods and schools safe and the best they can be.  So, yes, I write at 4am to avoid a barrage of email interruptions, yell at the Verizon repair man, cry when my boss yells at me, and worry non-stop about the emotional health of my children, their progress in school, and long term happiness and stability that I’m supposedly grounding for them.  Who wouldn’t be nuts trying to do all this? We all are. I tried to depict a lot of this in THE IDEA OF HIM with Allie’s struggles so that people who read it can relate, cry, nod, and laugh.

In this book, the protagonist female character is not leading towards happiness with a man as her goal.  Tell us about that.

I believe a lot of women’s fiction and tons of romantic comedies in Hollywood don’t get published or produced because executives feel women have to “get the guy” to be fulfilled and for the audience to leave happy and “relieved.” I did not want to add to that “fiction” and I wanted to write about the opposite: a woman finding strength on her own. How does she find what makes her most happy at work, at home, and in her personal life?  The proverbial knight in shining armor or kissing Colin Firth in the rain is a nice, neat way to end a story for sure, but I wanted to write about the power within to make ourselves feel okay, safe, and, yes, happy.  Lots of time in life to find the right guy who isn’t an “idea”, but first let’s focus on ourselves and what we want for a moment and prioritize that before we leap for the next or most convenient man to hopefully do it for us.

About the Author:
Holly Peterson is the author of the New York Times and international best seller, The Manny. She was a Contributing Editor for Newsweek and editor-at-large for Tina Brown’s Talk magazine. She was also an Emmy Award–winning producer for ABC News for more than a decade, where she cov­ered global politics. Her writing has been published in the New York Times, Newsweek, Talk, the Daily Beast, Vogue, Harper’s Bazaar, and other publications.