I have the distinct honor of interviewing author Robin Helm! I first interviewed Robin when she published Guardian, and I am so excited to have the opportunity to interview her once again! After reading Legacy, I had so many questions I was dying to ask Ms. Helm, and I wanted to share them with my readers! So please join me in welcoming the wonderful Robin Helm and let's begin the interview!!


"How does your faith incorporate into the Guardian Trilogy?"

My faith in God colors my entire world view. It is reflected in how I speak, write, act, make decisions, dress, and prioritize. The Guardian Trilogy is a statement of my faith and my beliefs. Though it is fiction, I fully believe that everything I have written could come true. Some of it has already come to pass. Much of Guardian and some of SoulFire is based on my life experiences, as well as those of my family and my acquaintances.

I have never written anything that is unScriptural, though not all of it is in Scripture. I believe that I will answer to God for everything I write, so I am very careful about what I include.

Selling books is wonderful, but my main objective in writing The Guardian Trilogy was not to make money. In fact, I have given away so many copies that I have yet to break even. These first books of mine were written to share my faith with those who might not ever go to church or read a Bible. I wanted to tell others about my view of God as a loving, caring, forgiving Savior. I wanted them to see the Christian life as positive. I have never felt that I gave up anything to be a Christian. God has given me so much that I could never repay the debt.

Now that I have shared my faith through the trilogy, I am writing Christian fiction. The book I am now writing, Accidentally Yours, is a romance set in both Regency England and the modern USA. My modern Darcy’s faith is strong, and it affects his character, but it is not the main tenet of the book. The chapters do not begin with Scripture as they did in the trilogy.

Who was your favorite character to write?

I suppose that would be a toss-up between Michael and Gabriel. Writing demons and evil became very dark for me, and I badly needed some comic relief. Michael, Gabriel, and Niall rescued my sanity more than once. While I enjoyed writing Michael in particular, Darcy was my favorite character. To me, he embodies what a husband should be.

I see that you use Mark 16:15-18 in Legacy as David, Elizabeth's dad, is reminded of the work completed by the SoulFire ministry between the three books. Up this point all but one of the signs have been fulfilled. When you began your writing process, did you have this scripture in mind?


He said to them, "Go into all the world and preach the good news to all creation. Whoever believes and is baptized will be saved, but whoever does not believe will be condemned. And these signs will accompany those who believe: In my name they will drive out demons; they will speak in new tongues; they will pick up snakes with their hands; and when they drink deadly poison, it will not hurt them at all; they will place their hands on sick people, and they will get well." Mark 16:15-18

Even at the very beginning, I planned to write a story about the end times, so this Scripture was naturally a part of that story line. However, many of the things that happened in SoulFire and Legacy evolved as I was writing. For instance, I did not plan to burn Atlanta, but when I got to the end of the chapter, it just came to me. It seemed right.

How do you choose names for your angels and demons? Do you choose them based on their meanings?

Yes, all of the demons and angels, as well as most of the people, have names with specific meanings. Adrian means “dark one,” Blade means “knife,” Donovan means “dark warrior,” Keegan means “little fiery one,” Nyx means “night,” and Ryu means “void, dragon.”  If you remember the situations in which those demons acted, you will know why I chose the name. By the way, Gregory means “vigilante.”

It is the same with the angels. Lexus means “defender,” Edward means “guardian of prosperity,” and Hector means “defend, hold fast.” I chose protector names for guardians and fighting names for warriors.

All of the names of God were used in situations which illustrated some part of His character. I listed the names of Jehovah with their meanings in the back of Legacy.

The names of places are important, too. Bethel means “house of God,” and Peniel means “face of God.” Peniel Baptist Church is the name of the church in which Billy Graham was ordained to the ministry. I taught school there many years ago.

Robin, even though Legacy does not end with a cliff hanger, I did see a possibility of the trilogy continuing with the legacy left behind by our main characters, both good and evil. Are there any thoughts or plans for another book in The Guardian Trilogy in the future?

I tied up the main storyline in the trilogy but purposely left the possibility of a sequel with the children taking main roles. Darcy and Elizabeth, along with the angels, would be in the book. I may write another book or two in the series if there is enough interest, but not for the next year. Accidentally Yours has taken over my mind, and I can't write two stories at the same time. I don't know how people do that, but I admire those who can do so.

You mentioned a new book?! Any idea on when Accidentally Yours will be published? You are currently posting chapters online, correct?

I hope to publish Accidentally Yours by December, in time for Christmas. I'm finishing chapter 4 and writing chapter 5 this week. I already have the book plotted out; it's just a matter of having the time to write it.
For those of you interested in reading Accidentally Yours, Robin is currently posting the story on her forum, Beyond Austen! 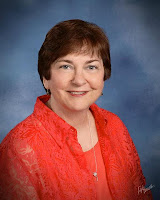 
Robin Helm is the author of The Guardian Trilogy, which includes Guardian, SoulFire, and Legacy. She is presently writing Accidentally Yours, scheduled for publication in the winter of 2012. Mrs. Helm shares a blog, Jane Started It, with the other writers of the Crown Hill Writers’ Guild. She has also published three Regency short stories: First Kiss, The Prize, and Treasure Chest.

She and her husband have two daughters, the elder a Navy nurse stationed in Guam, and the younger a first-year fourth grade teacher. They live in South Carolina with their Yorkie, Tobey, and Maltese teacup, Chloe, where Ms. Helm teaches piano, serves as Associate in Music and Music Academy Director for her church, and teaches elementary music in a local charter school.

Ms. Helm graduated with a BA from Piedmont International University. She is a member of the Delta Epsilon Chi honor society, JASNA, the American Legion Auxiliary, and the scholarship faculty of the United States Achievement Academy.

***Giveaway Time***
Robin Helm has been generous enough to offer up TWO copies, (ONE e-book- open internationally, and ONE paperback- US residents only) of one of the books in her The Guardian Trilogy, reader's choice!!
To enter, simply comment on this interview and my review and then fill out the Rafflecopter form. Extra entries are also available on the Rafflecopter form!
Stop back next week for my vlog for Legacy and more chances to enter the giveaway!! Winners will be announced Friday, October 5!!
Best of luck, readers, and thank you, Robin Helm!
a Rafflecopter giveaway
Posted by Unknown at 7:11 AM 20 comments: