Interview: Joana Starnes talks about From This Day Forward +Giveaway!!

Please join me in welcoming Joana Starnes to Leatherbound Reviews! We are so excited to have Joana here, talking about her latest release, From This Day Forward! Stick around after the interview because there is a giveaway! =)

Welcome, Joana! It's so nice having you here! Let's begin!
What was your favorite part about writing a sequel to Pride and Prejudice?

First of all, thank you, Jakki, for this opportunity to talk about my first book and introduce my second – and Ceri, for the amazing review! You’re both very, very kind! 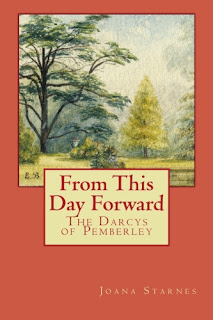 I think that, for me, the main attraction of writing a ‘Pride and Prejudice’ sequel was to imagine what might have happened to Jane Austen’s best-loved characters, and how their relationship could have evolved, after their marriage. To see them as real people, and find out how they might have lived, what they might have done, what sort of real-life events might have affected them.

Over the years, I have dragged my partially willing family to the locations of the most recent adaptations, and it was a joy to imagine Mr. Darcy riding over the surrounding fields, strolling with Elizabeth through the gardens or listening out for the patter of little Darcy feet!

I was particularly fascinated by Pemberley, and by how Elizabeth might have grown, from a pert young miss who loves reading and long country walks, into a strong woman, in charge of a family and a large estate. I never doubted she would be successful – Elizabeth can do anything! – but I especially enjoyed exploring the culture shock she might have experienced when she moved from quiet Longbourn to a lifestyle so radically different. From a small, restricted circle to the whirl of London. From the mindset of the young bride, rather confused by the avalanche of new duties and new acquaintance, to that of a confident woman who can run an imposing household, help Georgiana overcome her past, and generally become the mainstay of Darcy’s life, in every way.

Who was your favorite character to write? Why?

I loved writing about our favourite couple, of course – but it was always with a sense of awe. They are an institution, after all; an international treasure! Writing about Mr. Darcy is a joy and a delight, but in so many ways he is so intimidating! He is too well loved, too perfect despite his imperfections, so the pressure to do him justice can be more than a little daunting! As for Elizabeth, she is Jane Austen’s most sparkling creation, and that sets the bar sky-high!

Thus, while I loved creating my own version of them, I felt more relaxed while writing about other characters. Mrs. Bennet for one. There’s great fun in letting Mrs. B’s tongue run loose, and you can always trust her to advance the plot by disclosing some personal detail that the more decorous characters would never dream of bringing up!

My other great favourite was Colonel Fitzwilliam. He has been cast in many different roles over the years, and he did justice to them all. For my part, I chose to go with the one of ‘eminently worthy man doomed to unrequited love’. It’s probably hackneyed, but I find there’s something particularly appealing in the bitter-sweetness of it!

What did you find most challenging in writing a sequel?

I think the greatest challenge was to keep the characters true to their 18th century origins, in the context of a modern readership. Years ago, when Pamela Aidan started publishing her novels, her avid readers (myself included) seemed very keen on context and historical detail. I can’t quite figure out whether the same still applies to the majority of us, several years on.

For my part, I adored learning about Jane Austen’s world, which her characters would have inhabited. Still, it was a challenging line to tread between staying faithful to Jane Austen language and phrase construction vs. what modern readers would expect; between spinning a yarn that would appeal, by modern standards, while not making her characters act too ‘21st century’.

I was rather reluctant to go where Jane Austen wouldn’t have gone, especially when it came to exploring the resolution of one particular tricky stage in the Darcys’ relationship – and thus resorted to the device of seeing them from the perspective of outsiders cautiously looking in. Upon reflection, I should have been more willing to bite the bullet and probe further, as clearly some of my readers would have wanted me to do that. If I ever revisited ‘From This Day Forward’, this is something I would change.

What is your favorite thing about writing?

The very best thing about writing, for me, was the chance to create my own Regency dream world – with the added advantage that, unlike our real-life contemporaries, its inhabitants do pretty much what they’re told! Having said that, the characters sometimes do surprise you, and decide to have a life of their own. For example, I’ve always intended a secondary character to win the day (and the hand of the woman he loved) but somehow, another character decided to take over and steal his thunder! The latter was incredibly insistent – so I simply had to let him go and do just that!

What would you tell those readers who might be on the fence about reading From This Day Forward?

Well, I could say, if travelling back in time appeals to you, if you’ve read ‘Pride and Prejudice’ and you love Regency history and Jane Austen’s England, then have a look at Amazon to see what similarly-minded people had to say about my book (thank you so much, you lovely people, for taking the time and trouble to write in such detail, and with so much warmth and sentiment!). Then check it out for yourself – you might enjoy this take on the Darcys’ early years as a couple. The story follows them through the joys and tribulations of their time, in a context Jane Austen might have recognised, and their bond strengthens as they face family opposition, peril and heartbreak.

On the other hand, if you think it won’t do much for you to read about what battles Colonel Fitzwilliam might have been injured in, or what would have counted as juicy gossip in 1809 – and you’d rather have less context and more drama and a closer look at Elizabeth and Darcy doing the age-old ‘will they? – won’t they?’ dance, then check out my next book, ‘The Subsequent Proposal’. It will soon be available at Amazon and Smashwords. I hope you’ll like it. Either way, I’d love to hear from you!

Thanks for dropping by!

***GIVEAWAY TIME***
Joana Starnes has kindly offered up ONE (1) ebook copy of From This Day Forward for giveaway! Open internationally! To enter, comment on the interview. Feel free to ask Joana any questions.
For extra entries, you may also do the following:
*Tweet the interview (comment you tweeted)
*Comment on Ceri's review of From This Day Forward from Tuesday
*Tweet the review (comment you tweeted)
*Share on Facebook
Giveaway ends Wednesday, October 2.
Best of luck!! =)

Author Bio:
Joana Starnes lives in the South of England with her family.
A medical graduate, she had over the years developed an unrelated but enduring fascination with Georgian Britain in general and the works of Jane Austen in particular, as well as with the remarkable and flamboyant set of people who have given the Regency period its brilliance and glory.

For years, Joana has sought glimpses of Regency Britain in country houses, letters, diaries and old books - and has found tantalising snippets from a world Jane Austen and her characters would have recognised, with titbits of delicious gossip, long-held traditions, hints of fashion, echoes of events that would change history, as well as glances into the lost world of the English country house, in all its self-sufficient splendour.
All this, Joana would like to share with her readers, in the hope that they would enjoy the journey back in time in search of Pemberley just as much as she did.