I am thrilled to have the amazingly talented author Syrie James visiting Leatherbound Reviews today! Ms James is providing an excerpt to further tempt you, and there is a very generous giveaway! See below for more details. 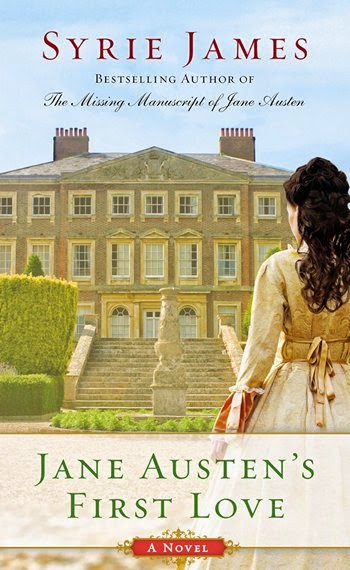 Jane Austen, age fifteen, is visiting in Kent for a month of festivities in honor of her older brother’s engagement. This morning’s event is a strawberry picking party, and a number of relatives and neighbors have gathered in the gardens of Goodnestone Park, home of the Bridges family. To Jane’s delight, a charming young man she has a crush on, Edward Taylor, asked her to pick berries with him. They’ve spent the past half hour engaged in both the activity and a lively, interesting conversation which has only increased her attraction to him.

The sun was past its zenith now, and it had grown quite hot. I wiped the perspiration from my brow, noting that Edward Taylor was in a similar glow. He removed his hat and ran his sun-browned fingers through his glossy reddish brown hair, then shook his head as if to cool it, an action which made my heart beat to an irregular rhythm. To distract myself, I plucked the stem and leaves off a particularly rosy strawberry and partook of its juicy sweetness. Mr. Taylor did the same. 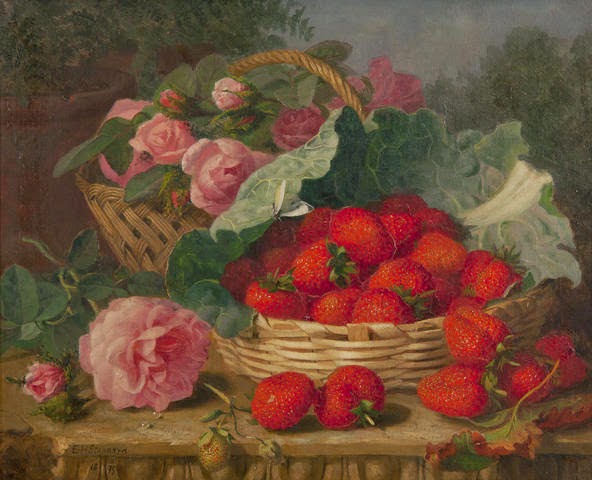 We ate the berries in silence, kneeling side by side, just inches away from each other, my skirts nearly touching his bent leg. Of a sudden, he said softly:
“You have a bit of strawberry, near your mouth, just there.” Reaching up, he gently brushed something from my cheek. That slight pressure of his fingertips caused a tingle to rush through me. Our eyes met and held; the expression on his countenance as he looked at me was very arresting—filled with deep interest and something more, which seemed to indicate a rising esteem. My heart pounded.
He hesitated, then dropped his hand.
I sat down and looked away, my cheeks burning, struggling to recover both my mental and physical equilibrium. We returned to berry-picking. The sweet aroma of sun-ripened berries filled the air. Around me I heard the twitter of birds in the trees, the delicate buzz of bees, the chatter of the other gatherers, the intimate murmurs of my brother Edward and Elizabeth beneath an apple tree, and the hum of conversation from the gentlemen and women who sat in the shade fanning themselves. Edward Taylor seemed to be having as much difficulty resuming our discussion as did I. At length he said, with an unfamiliar trace of awkwardness:
“I believe we were speaking about your father’s farm?”
“I believe we were.”
“How large is it?”
“My father’s farm?”
“Yes. How many hands does he employ? What is he growing this annum?”
In some bemusement, I answered: “I cannot tell you.”
“No? It is a secret then?”
I laughed. “Hardly. I simply do not know. He leases, I believe, about two hundred acres just up the road from our house—it is called Cheesedown Farm—but as for the specifics to which you refer—I have not the vaguest idea!”
“I take it, then, that farming is not one of your passions?”
I shook my head. “I have the greatest respect for farmers. We cannot do without them; the food they produce sustains us and the community. I have a deep appreciation of the land—and there is much amusement and many comforts attending a farm in the country. But I admit, on a day-to-day basis, my interests lie elsewhere.”
“That is something else we have in common!” Mr. Taylor smiled as he added another berry to his basket.
“Oh? I thought, when you asked such probing questions, that you shared your father’s enthusiasm for agriculture.”
“Not at all. I was just attempting to be—polite.” We both laughed, as he continued, “My brothers and sisters and I spent the bulk of our time studying while in Carslruhe, but we were also obliged, for health and exercise, to work on the farm several mornings a week. Do not get me wrong; I love to be out of doors. I take pleasure in vigorous activity. I enjoy a morning of berry-picking, like this, or a long walk through the woods; but I would rather hop a fence than mend it, would rather climb a tree than trim it, and would rather ride an ox than feed it.”
“How I agree with you! I know this might sound shameless or even sacrilegious—and I do so admire my father’s devotion to his farm—but to constantly be worrying about the vagaries of the weather—”
“—and the rise and fall of the market—”
“—to oversee labourers, and till the soil—”
“—plant seeds, and clear weeds—”
“—the work and responsibilities have always seemed to me very tedious.”
“Yes!”
We exchanged a smile; I felt the mood ease again between us, to something fine and comfortable.
Gesturing towards our baskets, which were now filled to the brim, he said, “In that vein: I think we have done our duty where agriculture is concerned today—do you agree? Shall we move into the shade and sit for a little while?”
This idea, while very appealing to me, never materialised; for at that moment Lady Bridges made a general announcement, observing that everyone seemed to have completed their berry-picking, and inquiring as to whether they had enjoyed themselves. Her question was met with enthusiastic replies and applause, after which her ladyship directed everyone to bring their filled baskets back to the tables in the first garden, where refreshments were now being served.
I retrieved Edward Taylor’s coat, shook it briskly to remove the dust which had there accrued, and returned it, uttering my thanks. The whole party began to remove en masse, and as we moved with it, Mrs. Watkinson Payler appeared abruptly beside us with her daughter in tow, and with a bright smile said,
“Edward! Charlotte has not entirely recovered from the heat, I dare say she would be most appreciative if you would give her your arm.”
Mr. Taylor, after the briefest hesitation, smiled handsomely, and hanging his basket over one arm, he offered her an elbow. “It would be my honour, Charlotte.”
My heart sank as Charlotte quietly slipped her hand through the bend of Edward Taylor’s arm; but my spirits immediately revived when, turning to me, and holding out his other arm, he added,
“Miss Jane? May I escort you both?”

Dear Reader: I hope you enjoyed this excerpt from Jane Austen's First Love. What surprising thing does Jane learn about Edward Taylor during the luncheon? Does Edward teach her to shoot a bow and arrow? Read the book to find out!

From the publisher:
In the summer of 1791, fifteen-year-old Miss Jane Austen is determined to accomplish three things: to do something useful, write something worthy, and fall madly in love. While visiting at Goodnestone Park in Kent for a month of festivities in honor of her brother's engagement to Miss Elizabeth Bridges, Jane meets the boy-next-door—the wealthy, worldly, and devilishly handsome Edward Taylor, heir to Bifrons Park, and hopefully her heart! Like many of Jane’s future heroes and heroines, she soon realizes that there are obstacles—social, financial, and otherwise—blocking her path to love and marriage, one of them personified by her beautiful and sweet tempered rival, Charlotte Payler.

Unsure of her own budding romance, but confident in her powers of observation, Jane distracts herself by attempting to maneuver the affections of three other young couples. But when her well-intentioned matchmaking efforts turn into blundering misalliance, Jane must choose between following her own happily-ever-after, or repairing those relationships which, based on erroneous first impressions, she has misaligned.

Author Bio:
Syrie James, hailed as “the queen of nineteenth century re-imaginings” by Los Angeles Magazine, is the bestselling author of nine critically acclaimed novels that have been translated into 18 languages. Her books have been awarded the Audio Book Association Audie, designated as Editor’s Picks by Library Journal, named a Discover Great New Writer’s Selection by Barnes and Noble, a Great Group Read by the Women’s National Book Association, and Best Book of the Year by The Romance Reviews and Suspense Magazine. Syrie is a member of the WGA and lives in Los Angeles. Please visit her at syriejames.com, Facebook or say hello on Twitter @SyrieJames. 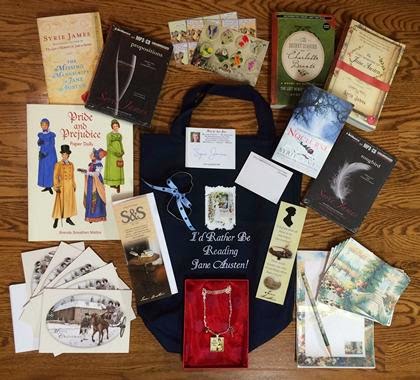 To celebrate the holidays and the release of Jane Austen's First Love, Syrie is giving away five prize packages filled with an amazing selection of Jane Austen-inspired gifts and books!

To enter the giveaway contest, simply leave a comment on any of the blog stops on the Jane Austen's First Love Holiday Blog Tour.

Increase your chances of winning by visiting multiple stops along the tour! Syrie's unique guest posts will be featured on a variety of subjects, along with fun interviews, spotlights, excerpts, and reviews of the novel.


Contest closes at 11:59pm PT, December 21, 2014.
Five lucky winners will be drawn at random from all of the comments on the tour, and announced on Syrie’s website on December 22, 2014.
The giveaway contest is open to everyone, including international residents.
Good luck to all!