Review: A Madaris Bride for Christmas by Brenda Jackson 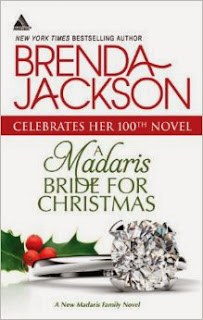 From the publisher:
One by one, Madaris men have surrendered to the matchmaking schemes of Felicia Laverne Madaris, matriarch of the family. But Lee Madaris isn't letting anyone else control his destiny. He'll bring a bride of his own choosing to the family's holiday gathering—if his hotel's gorgeous new chef will agree to a marriage of convenience.

It's not just the chance to work at the Strip's hottest hotel that brought Carly Briggs to Vegas. Witnessing a crime in Miami may have made her a mob target. Though she's reluctant to complicate their working relationship, Lee's tempting offer is so hard to resist. And soon, desire is clouding their no-strings arrangement.

The danger that made Carly flee Miami is about to land at their door. So Carly and Lee must decide who to trust, when to let go—and whether a love they never anticipated is strong enough to pass the ultimate test.

Review:
Carly Briggs is a strong, independent, self-reliant chief who recently moved from Miami to Las Vegas. Lee Madaris an up-and-coming hotelier with two very successful hotels and one more in the works. What happens when these two individuals come together? Passion and lot of it!!
During one Miami night, while gather supplies from the storeroom of the restaurant she works in, Carly overhears a man begging for his life followed by a single gunshot. Taken aback by what she hears, she calls the police tip line and leaves an anonymous message. Still shaken when she arrives home after her shift, she talks things out with her best friend, Heather. Heather tells her that she must have just dreamed it and not to worry about it since if it really did happened, she has already reported what she might have heard. Having watched the news and reading the paper, nothing out of the ordinary had been reported and Carly begins to believe it really was just a bad dream. Then an unexpected offer to become a pastry chef at a restaurant in a very successful new hotel in Vegas out of the blue, she takes it.
While celebrating her birthday in style and enjoying her day off by staying the night at the hotel in which she works. She is alone and dancing by herself on the balcony and does not see a gentlemen approach and ask for the dance. Reluctant at first, she decides to accept since this gentleman exemplifies tall, dark and handsome to a tee.  They share an amazing dance and unforgettable kiss that leaves both breathless.
Lee is instantly attracted to Carly and just cannot explain it and will stop at nothing to make her his. Carly, having been hurt in the past, is hesitant to believe that Lee, or any man for that matter, could possibly be interested in her. Lee, who is on a mission to out maneuver is his match making great-grandma, Mama Laverne, by finding a wife of his own choosing, will stop at nothing to show Carly just how much he wants her and will do anything to protect her when trouble come calling to their doorstep.  Truth be told, Lee Madaris reminds this reader a lot of Mr. Fitzwilliam Darcy; someone that will go to the ends of the world for the women he loves.
This story has all it all… romance, suspense, intrigue, passion and family issues. This is a wonderful story that will keep you glued until to end to see if this couple can admit that they love each other in ways neither believed was possible. And when Lee brings Carly home to meet the family it turns into a Christmas neither will ever forget, but will Mama Laverne have the last laugh?