Today's Frolic and Play excerpt is brought to you by the lovely Mary Jo Putney. She is the author of many entertaining Christmas stories. Today she provides readers an excerpt from The Christmas Tart, which appears in her three novella anthology Christmas Mischief. Ms. Putney is also giving away TWO paperback copies of Mischief and Mistletoe. Open internationally! So sit back and enjoy a fun curricle ride. 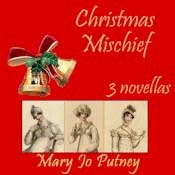 Penniless after being unjustly fired from her job, Nicole Chambord meets Sir Phillip Selbourne in rather unusual circumstances, Philip decides to take her to his family estate for Christmas so she won't starve.  But he hadn't counted on the weather.

After that conversation flagged, for the weather was steadily worsening. The mizzling rain froze wherever it touched, and the muddy ruts began to solidify to iron-hard ridges that rattled the curricle and its occupants to the bone. Earlier there had been a steady trickle of traffic in both directions, but now they were alone on the road.

The Northamptonshire terrain consisted of wide rolling hills that took a long time to climb. It was at the top of one such ridge that the curricle’s wheels got trapped in a deep, icy set of ruts that ran at a tangent to the main direction of the road. Caught between the pull of the horses and the ruts, the curricle pitched heavily, almost spilling both passengers out.

“Damnation!” Using all of the strength of his powerful arms, Sir Philip managed to bring the carriage to a safe halt. “I’m sorry, Nicole. In a heavier carriage we could manage, but the curricle is just too light for these conditions. We’ve scarcely eight miles to go, and I’d hoped to make it home, but it’s dangerous to continue. There’s a small inn about a mile ahead. We can stop there for the night.”

Struggling to keep her teeth from chattering, Nicole nodded with relief. “Whatever you think best, monsieur.”

He urged the nervous horses forward again. “What a polite answer when you would probably rather curse me for risking your neck.”

“I’m in no position to complain. Two days ago I was this cold, but then I had no prospect of finding a warm fire at the end of the day.”

The road down the hill was steep and dangerous, so icy the horses sometimes slipped. The light was failing and visibility was only a few yards, but with Philip’s firm hands on the reins, they made it almost to the bottom without incident.

Then they reached a bare spot where the wind had turned a wide puddle into a treacherous glaze of ice. As soon as the curricle’s wheels struck the slick surface, the vehicle slewed wildly across the road.

The horses screamed, and one reared in its harness. Philip fought for control, and Nicole clung to railing and cat basket for dear life, but to no avail. The curricle tipped over, pitching both occupants onto the verge. Nicole struck the ground hard and rolled over several times, coming to rest in an ice-filmed puddle, too stunned to speak.

While she struggled for breath, a piercing cry split the air. Immediately Philip shouted, “Nicole, where are you? Are you hurt?”

Another shriek came from the vicinity of Nicole’s chest and she wondered dizzily if that was her own voice and she was too numb to know what she was doing. Then she realized she was still clutching the cat basket in her arms. Poor Merkle had been tossed and rolled as much as her mistress and was now protesting in fierce feline fashion.

As she pushed herself to a sitting position, Nicole gasped, “I’m all right. At least, I think I am. Merkle is
the one carrying on.”

“Thank heaven!” Sir Philip emerged from the gloom and dropped to his knees beside Nicole, then pulled her into his arms, basket and all. She burrowed against him, grateful for his solid warmth.

“You’re sure you’re not hurt?” he asked anxiously, one hand skimming over her head and back, searching for injuries.

Nicole took careful stock. “Just bruised. A moment while I check on Merkle.”

She would have been happy to stay in Philip’s embrace, but conscience made her sit up and lift the lid of the basket. Merkle darted out and swarmed up her mistress’s arm, crying piteously until she found a secure position on Nicole’s shoulder, claws digging like tiny needles.

“Merkle can’t have taken any injury either or she’d not be able to move so quickly,” Sir Philip observed as he got to his feet. He helped Nicole up. “Just a moment while I see if the curricle is damaged.”

Nicole tried to brush away mud and crushed weeds with one hand while soothing the cat with the other. The puddle had finished the job of saturating her cloak, and the bitter wind threatened to freeze her into a solid block of ice.

Sir Philip muttered an oath under his breath. “The horses seem to be all right, but the curricle’s left wheel is broken.”

“Surely it can’t be much farther to the inn you mentioned,” Nicole said through numb lips. “We can walk.”

“Up one long hill and down another,” he said grimly. “That’s too far on a night like this. Luckily there’s an old cottage just a few hundred yards from here. I don’t know who lives there, but it’s always well kept so I’m sure it’s occupied. Just a moment while I get the curricle off the road and unharness the team.”

To reduce her exposure to the wind, Nicole hunkered down beside the road and returned an indignant Merkle to the basket. The baronet undid the leather harness straps, tending the job horses as carefully as if they were his own. Nicole’s father would have approved; he always said that how a man treated his beasts was a good guide to his character.

When Philip had freed the team from its harness, Nicole stood and joined him, the basket handle slung over one arm. “Which way, monsieur?” she said with a hint of chattering teeth.

“Just along here.” Taking the reins in his right hand, Philip put his left arm around his companion, wanting to warm her. He felt her slim body shaking under her damp cloak, but she did not complain. She really was the gamest little creature.

The lane had a surprisingly smooth surface, which meant that it was now treacherous with sheet ice. Even with Philip’s arm to support her, Nicole was skidding with every step. After she had barely survived several near-falls, he turned and scooped her up in his arms, cat basket and all.

When Nicole gave a little squeak of surprise, he explained, “Like the curricle, you are too light for these conditions!”

"The Christmas Tart" is available in the three novella e-book collection  Christmas Mischief by Mary Jo Putney.  Published by RegencyReads.com

Oh, what a scene! How many of you are wanting to pick up the book after that scene? I know I am! 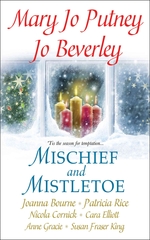 Mary Jo Putney is giving away TWO (2) paperback copies of Mischief and Mistletoe! (1 US and 1 International)
To enter, please comment on this blog post WITH your email address or Twitter handle so I know how to contact the winners.
Extra entires for tweeting about the giveaway. Simply comment you tweeted along with the link.
Giveaway ends 12/21!
Best of Luck!!