Guest Post: All the Appearance of Goodness by Maria Grace 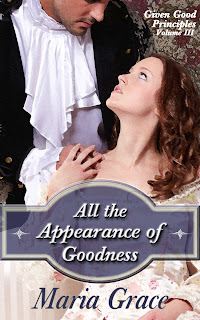 Author Maria Grace is visiting Leatherbound Reviews today as part of her blog tour for her latest release, All the Appearance of Goodness. I have quite enjoyed the first two books in her Given Good Principles series, and I am looking forward to reading this one later this summer. Without further ado, I am going to turn it over to Grace.

All the Appearance of Goodness: Epilogue

A petite young woman stood silhouetted against the rising sun.  Her warm woolen coat hid her increasing belly to all but the most observant witnesses. The morning mist caressed her face, welcoming her into the quiet church yard.  From the window of the grey stone parish church, her observer watched the vigil, repeating a common ritual. A familiar pull tugged at the vicar’s heart.  John Bradley pursed his lips and nodded his grey head.

He donned his coat reached for his cane, his familiar wintertime friend. The gnarled wooden knob fit his calloused hand, reminding him of years gone by, but those reflections would wait until later.    He looped his new muffler, knitted for him by Pemberley’s mistress, around his neck and pulled on his wide brimmed hat. Now he was ready to face the cold morning air. Ordinarily, he would not have been so diligent in his preparations, but the young woman would scold him relentlessly if he did not. He smiled to himself and pushed the heavy wooden door open.  A chill wind buffeted him as he stepped into the morning.  He pulled the muffler tighter around his neck.   How dear were the hands that had crafted the thoughtful gift.  The entire estate benefited greatly from her presence.

He approached with deliberate, unhurried steps. There was plenty of them for reflection and contemplation this morning. She did not turn when he stopped beside her. For several minutes they stood in silence, side by side, contemplating the neat graves, two long set, two others much more recent, but showing signs of settling into the quiet repose of the family resting place.

“I can hardly believe they are gone.” Her voice was brittle in the morning breeze.

“It is always a tragedy to lose a babe before he is churched,” Bradley touché her shoulder softly. “I buried my daughter and her son before he was churched. I understand.”

She turned to him, tears trickling down her cheeks. “I am so sorry that you do. I would not wish this pain on anyone.” She looked back at the graves and dabbed at her face with her handkerchief. “I never expected to lose them, and so close together. Who would have thought?”

He shook his head.

She wrapped her arms around her belly. “I think I would be more afraid of my coming confinement if it were not for your comfort.”

“I am grateful to have been service.”

The iron gate screeched. No amount of oiling or mending seemed to change its familiar greeting.   It closed again, the clang echoing against the church wall and gravestones.  A tall, young man carrying a quiet baby in his arms. The child gazed up at the him with a smile and sparkling eyes.

“I think Bennet was pleased to go with me this morning,” Darcy stood beside his wife and Bradley. “His parents were pleased to know he was so content in their choice of caregivers whilst they visit Meryton.”

“I do believe you are correct, sir. He seems in quite good spirits.” Bradley reached up to pat the boy’s cheek, allowing the child the grab  his finger and try to shove it in his mouth. “He is a dear child with such a sweet disposition.”

“He reminds me of his mother,” Elizabeth murmured, stroking Bennet’s back. “She was a very sweet baby.”

Darcy laid a warm hand on her shoulder. “Mary will be a good mother to him in her stead.”

“And he will be a good son to her and Pierce.” She looked up at him lovingly. “They all have you to thank for that.”

“What more was there to do?” She shrugged. “After she eloped with Lt. Harris she could not return to Meryton, much less return as a widow, near to her confinement. The scandal would have destroyed my mother.” She leaned her head on his shoulder. “And it was you who insisted she be buried here, near the place where she found comfort in her last months.”

Bennet squirmed and reached out for his aunt.

She took him from Darcy and kissed the baby’s cheek. “He is such a cheerful boy, so much like Lydia.  She was such a comfort to Mary, both of them sharing their confinement together.”

“It was difficult to watch Mary struggle so.” Darcy straightened his coat. He gazed at the marble cherubim standing guard over his parent’s graves.

“She was so hopeful after Lydia delivered so easily. After two day of travail, I was sure we would lose her, not Lydia.” Elizabeth cuddled Bennet closer. “After all that, it seemed so cruel that Mary’s son never took his first breath.”

“No, dear, it was a mercy.” Darcy shuddered slightly. “The child could not have lived long and watching him die slowly would have been worse.”

“I do not think Mary would have lived if Bennet had not needed her so desperately.” Elizabeth glanced back at Bradley.

“I am grateful I did not have to bury another daughter that day.” Bradley swallowed hard. “Instead, I have a grandson, Bennet Bradley Harris Pierce. The boy has almost as many names as you, Darcy.” He took the baby from Elizabeth. “God has been good to us. And God willing, in the summer, little Bennet will start to welcome his cousins.”

“It is still difficult to imagine Richard a father.” Darcy laughed.

“I suppose he says the same of you.” Elizabeth arched her eyebrow at him.

“That he does. He might be insufferable if he had been the first to produce an heir but since we attribute that honor to Pierce now, his pride is under good regulation.”

“I just received a letter from Louisa and one from Kitty. It seems there will be more cousins to welcome in the fall.”

“Now Bingley I can picture as a father! I remember well watching him and Kitty playing with the Gardiner’s children. I think I envied his ease with them.”

“In that, I believe little Bennet has done you a world of good. You are quite comfortable with him now.” Lizzy twined her fingers in his as she looked up at him.

They reminded Bradley so much of George and Anne Darcy. They would have been proud of the man Darcy had become. It was good to have Pemberley manor filled with the smiles and sighs of love once again.

Elizabeth peeked at Bradley. She giggled and broke away, taking the baby back.

“You are all men of good principles. I am grateful that I have been allowed to be here to help pass them on yet another generation.” Bradley straightened his coat and his muffler.

“As are we, sir.” Lizzy leaned over and kissed the vicar’s cheek.

What is a young woman to do? One handsome young man has all the goodness, while the other the appearance of it.  How is she to separate the gentleman from the cad?

When Darcy joins his friend, Bingley on a trip to Meryton, the last thing on his mind is finding a wife. Meeting Elizabeth Bennet changes all that, but a rival for his affections appears from a most unlikely quarter. He must overcome his naturally reticent disposition if he is to have a chance of winning her favor.

Elizabeth’s thoughts turn to love and marriage after her sister Mary’s engagement. In a few short weeks, she goes from knowing no eligible young men, to being courted by two. Both are handsome gentleman, but one conceals secrets and the other conceals his regard. Will she determine which is which before she commits to the wrong one? 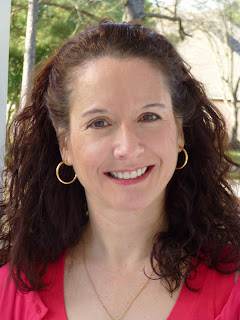 Author Bio:
Though Maria Grace has been writing fiction since she was ten years old, those early efforts happily reside in a file drawer and are unlikely to see the light of day again, for which many are grateful.

She has one husband, two graduate degrees and two black belts, three sons, four undergraduate majors, five nieces, six cats, seven Regency-era fiction projects and notes for eight more writing projects in progress. To round out the list, she cooks for nine in order to accommodate the growing boys and usually makes ten meals at a time so she only cooks twice a month.

Email ThisBlogThis!Share to TwitterShare to FacebookShare to Pinterest
Labels: All the Appearance of Goodness, excerpt, Guest Post, Maria Grace