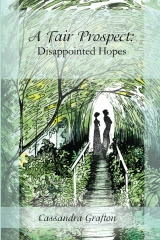 Dear readers, I am excited to bring you a new Austenesque author, Ms. Cassandra Grafton. Cassie fell in love with Mr. Darcy at the tender age of 15 when Pride & Prejudice was a set book for her English Lit examination and feels like they have been going steady ever since! Having dabbled in attempts at writing for many years, she finally took the plunge in 2006 to write some P&P inspired short stories for an online community of writers who have since all become friends. The next natural step seemed to be a full-length story, and A Fair Prospect was born.

Ms. Grafton has been gracious enough to answer some interview questions about her and her debut novel, A Fair Prospect.

Welcome, Cassie! It’s so nice to have you on the blog and get to know you and your work a little better. I thought that since you are a new Austenesque author, you would like to tell readers a little about yourself and your writing journey.

Thank you, Jakki, and thank you also for inviting me to your blog!

My only hobby as a child was reading, and when I was engrossed in a book, nothing could penetrate my world – I was oblivious to everything going on around me, much to the amusement of my family. This love of reading inspired an interest in trying my hand at some stories of my own. I started writing in my teens but never completed anything (though I still have these poor attempts locked away somewhere!) Then life took over, and I became a wife and mother, and although I still dreamed of being a writer one day, I never applied myself enough to get beyond the opening chapters of any story.

Then, in 2002 we moved to the USA for five years, and I suddenly had time on my hands! I discovered an online fan fiction community and started to co-write short stories with a fellow member, and thanks to her support, these were the first pieces of writing I ever completed. It was a small step then to discovering the online Jane Austen communities, where, in 2006, I ventured into writing short stories on my own. It was other forum members asking me if I planned to write a full-length story that inspired me to have a go!
What gave you the idea for the premise for A Fair Prospect?

I wanted to write a truly romantic story, one that would touch people’s hearts and that was very much about the characters and their journey.

Initially, I was inspired by the proposal in the rain that takes place in the 2005 film. That scene ends with Darcy walking away and Elizabeth remaining behind, and I wondered what would happen if he came back? As a result, A Fair Prospect opens with the first proposal and that is precisely what happens!

I know that some fans can be divided over how Darcy is portrayed on film, but I have a definite soft spot for both Colin Firth and Matthew MacFadyen, and I believe both of them have influenced my version of Darcy in this story in different ways. Although when I was originally writing it, Matthew’s Darcy was very much in mind, since finishing the story I have worked hard on it to try and leave interpretation open to the reader, and so I now hope that A Fair Prospect can be read by anyone who loves Pride & Prejudice, be it a fan of the book or one of the many TV/film adaptations.

Aside from this, two other things inspired the story. Firstly, how might you see someone differently if you had an unexpected innocent, but physical, encounter with them – how might it influence your thoughts about that person (something I have personal experience of, for it is what turned my husband from being just an old friend into my partner for life).

This led me to thinking about the restrictions on physical touch back in the Regency era – how might it affect Elizabeth Bennet’s thoughts about the man if something, albeit innocent, happened that opened her eyes to Darcy in a physical way? This feeds the opening scenes of my story and introduces a theme that runs through all three volumes: can there be so much awareness in a man's touch?

Secondly, I have always wondered about those months in Pride & Prejudice when Elizabeth and Darcy did not meet. From April to August they were on their own separate paths, but I wanted them to continue in each other’s company throughout all the awkwardness of the aftermath of the failed proposal, to see where this might take them, bearing in mind Elizabeth’s seeing Darcy through new eyes.

From the blub, I see that Mr. Darcy has a bit of competition. Personally, I love a jealous Darcy! I’m dying to know a bit about Mr. Nicholas Harington.

Nicholas Harington and Elizabeth have known each other all their lives – he is the Godson of Mrs. Gardiner (she was at school with his mother and they remain very close friends). He is the middle son of three, and he and Elizabeth have developed a very close friendship over the years, for they are very alike. It is his request for Elizabeth to come to London earlier than planned and to make some stay with her aunt and uncle that precipitates her following Darcy to town a day after he and the Colonel leave Rosings.

A Fair Prospect Volume 1: Disappointed Hopes is currently available, can you tell readers when volumes 2 & 3 will be published?

Volume II: Darcy’s Dilemma will be available in May, and Volume III: Desperate Measures will be out in the summer. 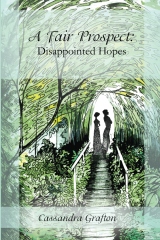 Nursing his wounds after his rejection by Miss Elizabeth Bennet, Fitzwilliam Darcy returns to London a devastated and humbled man. The lady, meanwhile, is battling the unprecedented feelings stirred by having endured an innocent but intimate encounter with the gentleman in the aftermath of his proposal. Soon on her way to Town herself for an unanticipated stay, she is comforted by the presence of an old family friend, one Nicholas Harington – the son of a wealthy family whose position in society rivals that of the Darcys of Pemberley. Circumstance soon throws Darcy back into the company of Elizabeth, much to their mutual consternation, and also introduces him to Harington who has emerged as a potential suitor for Elizabeth’s hand, a union that is viewed as a fair prospect by all – except, perhaps, Darcy himself.

A Fair Prospect Excerpt:
Preoccupied as she was, it was a moment before Elizabeth realised she was no longer alone and, with a gasp, she found herself face to face once more with the source of her displeasure.


***Giveaway Time***
Now, the moment you all have been waiting for!! In celebration of releasing her first novel, Cassandra Grafton is giving away 2 copies of A Fair Prospect (print or any format of eBook ~ winner’s choice)! To enter, simply comment on this interview telling us what intrigues you about this book or ask Cassandra a question about her debut novel.Please leave your email address so I know how to contact the winner. For extra entries, tweet about the giveaway and follow Cassandra Grafton on Twitter. Please comment that you have done these things. OPEN INTERNATIONALLY!!
Giveaway ends April 1! Good Luck!!