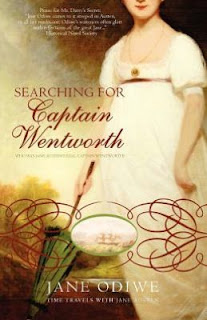 It is often expressed that Jane Austen was quite the observer of human nature and folly, and her characters are portrayals of people she has met or observed. What if her fodder for Persuasion came from her neighbors while living in Bath as well as her own relationships? It is not uncommon for authors to leave parts of themselves in their novels. In Searching for Captain Wentworth, Jane Odiwe give readers a glimpse into Austen’s life that makes one wonder if these similarities are snapshots of the real Jane. Were Anne Elliot’s despondent feelings regarding leaving Kellynch Hall a sketch of Austen’s feeling upon having to give up Stevenson? Was Captain Wentworth inspired by Jane’s love that got away? Embark on a journey highlighting a uniquely told love story connecting two eras.

After receiving an antique rosewood box and a key to her family place in Bath from her Great Aunt Elizabeth, and with nothing holding her back, Sophie Elliot decides to take a holiday. She can think of no better place for an Austen lover to begin writing her first novel than living next door to where Jane and Cassandra Austen resided.

Upon arriving at Sydney Place, Sophie feels as if she is in a time warp. The flat bespeaks a much simpler time with its cheval mirrors, heavy, damask curtains, gilt candlesticks, and a dressing table draped with muslin and ribbon. Between the Regency feel of the flat and the white kid glove, reminiscent of Captain Wentworth, that was dropped by her mysterious neighbor Josh Strafford, Sophie decides it’s time to seek the adventure her ancestors are calling her to embrace.

On this journey, Sophie treasures her friendship with the Miss Austens, and struggles with Society’s strictures that stifle women’s independence. In the end, Sophie finds herself torn between her feelings for Lieutenant Charles Austen, Jane’s younger brother, and those for her neighbor, Josh Strafford. Can one truly be in love with two different people from two different centuries? Will Sophie find her Captain Wentworth?

I am always a little skeptical at the outset of reading a time-travel novel. My mind is filled with questions: How is the author going to deliver on the premise? Is it going to be well executed and believable or far-fetched, prohibiting my disbelief from being suspended? Ms. Odiwe seamlessly melds together the two periods. Whether the descriptions were Regency or present-day Bath, I was easily transported to those scenes alongside Sophie. I quite love it when a novel takes me places I dream of visiting free of charge.