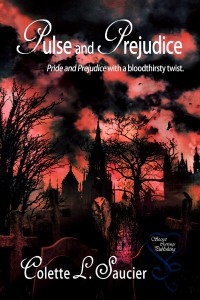 From the Publisher: When the haughty and wealthy Fitzwilliam Darcy arrives in the rural county of Hertfordshire, he finds he cannot control his attraction to Elizabeth Bennet – a horrifying thought because, as she is too far below his social standing to ignite his heart, he fears she must appeal to the dark impulses he struggles to suppress. Set against the vivid backdrop of historical Regency England, this adaptation of Pride and Prejudice follows the cursed Mr. Darcy as he strives to overcome both his love and his bloodlust for Miss Elizabeth Bennet. This compelling variation remains faithful to the original plot and style of the Jane Austen classic but tells Darcy’s story as he descends into the seedier side of London and introduces Elizabeth to a world of passion and the paranormal she never knew existed.

Due to his affliction, Fitzwilliam Darcy realizes marriage is a luxury he can ill-afford, regardless of wealth or relations.  However, once in Hertfordshire, can he disregard this strange feeling in his chest every time he thinks about Elizabeth Bennet? In Pulse and Prejudice, Darcy endures the same struggles in acknowledging his growing ardor for Elizabeth Bennet: familial duty, disparity in their situations, her vulgar relations and lack of connection, yet now he has one more matter to add to this list. He’s a vampire. Struggling with his feelings for Elizabeth is not Darcy’s only growing desire. He soon finds himself unable to sate his hunger and blood-thirst. Will Elizabeth be the answer to Darcy’s insatiable desire, or will she flee once she learns the dreadful truth of Darcy’s circumstances?

From the very beginning, Saucier has captured Darcy’s prideful demeanor and Elizabeth’s teasing nature, staying true to cannon in these regards. In the same way readers only see Pride and Prejudice from Elizabeth’s perspective, here, the majority of this story is told from Darcy’s point-of-view, often times driving me to distraction not knowing what Elizabeth’s thoughts or feelings are.

Similar to Mr. Darcy being a werewolf in Mr. Darcy’s Bite and an angel in The Guardian Trilogy, I was constantly intrigued, wondering how Darcy and Elizabeth will overcome obstacles greater than just their stations in life. For me, Darcy as a vampire works. Even though this is my first foray in to the world of vampires, I now have an urge to read other vampire variations and retellings so I may compare these works, discovering what vampire aspects I find entertaining and which ones may seem a bit far fetched.

Even though this is a Pride and Prejudice retelling, and I know authors use Austen’s words in their retellings, I felt there was too much of Austen’s original dialog used. So much so, at times I caught myself skimming over the words since I already knew them. However, when Saucier deviated from the original, creating new scenes and dialog, I found those parts enthralling. From about halfway through volume three and the majority of volume four, I didn’t want to put down the book, as Saucier’s unique spin on the story was spellbinding.

I enjoyed Saucier’s writing style and found this book to be well-written. While I am not a huge fan of sequels, the ending is crafted in such a way to make me desirous for what will come next between Darcy, Elizabeth, and even Wickham.
Since my main qualm was too much of Austen’s words are used, I have a feeling that Dearest, Bloodiest Elizabeth, the sequel to Pulse and Prejudice, will be a more gripping tome. One I cannot wait to get my hands on!