Review: Persuade Me by Juliet Archer 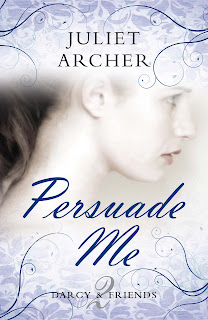 From the Publisher:
When do you let your heart rule your head?
When it comes to love, Anna Elliot is stuck in the past. No one can compare to Rick Wentworth, the man she gave up ten years ago at the insistence of her disapproving family. What if she’s missed her only chance for real happiness?
Since Anna broke his heart, Rick has moved on – or so he thinks. Out in Australia, he’s worked hard to build a successful career – and a solid wall around his feelings.
The words ‘forgive and forget’ aren’t in Rick's vocabulary. The word ‘regret’ is definitely in Anna’s. So, when they meet again on his book tour of England, it’s an opportunity for closure.
But memories intrude – the pure sensuality of what they once shared, the pain of parting … And she has to deal with another man from her past, while his celebrity status makes him the focus of unwanted attention.
With Anna’s image-obsessed family still ready to interfere and Rick poised to return to Australia, can she persuade him to risk his heart again?

“Never forgive, never forget” has been Dr. Rick Wentworth’s mantra for the last ten years. However, after a decade, Rick believes it’s time to forget the past. And what better way to do that than to meet it head on? After publishing his first book, Sex in the Sea, Rick Wentworth decides to return to England promoting his book, and proving to himself that he is capable of forgetting the past.

Upon hearing that Rick Wentworth is back in town, Anna Elliot’s mind is aflutter. She has not forgotten Rick these ten years. Yet, unlike Rick who holds onto the past with bitterness, Anna holds onto it with something like regret. What will their first encounter be like? What will they say to each other? Anna is all anticipation and fear at their imminent meeting.

Their reunion goes worse than Anna expected. Gone are Rick’s chocolate fudge-cake eyes, dark and delicious, and so deadly to Anna. Instead, they’re replaced with coolness and distance, and manners leaving Anna feeling anything but wanted. Can Anna convince Rick she regrets her decision and that she still is the one for him? Or has Rick moved on to more lively women? The varying emotions and thoughts each character has are tangible.

Ms. Archer writes not only an amazing modern adaptation of Persuasion, but she also writes a to-die-for Rick Wentworth! As I read, I could feel all of his conflicting emotions. Wentworth shows a more competitive side when he believes Charles Musgrove is Anna’s husband, eager to prove he is the better man…in all regards. Yet, unable to let go of the heartache Anna caused, Rick uses their intimate past to say some pretty hurtful things to Anna, even I was feeling the full force of his words. However, try as he may to remain angry and bitter, Wentworth finds himself showing unexpected kindness to Anna at various times. With all of these differing emotions, which one will win out in the end? Jealousy, anger, or something deeper?

Persuade Me is a fast-paced, emotion-filled, humor-laden modern Persuasion adaptation that I could not put down, a must read for any Persuasion lover.