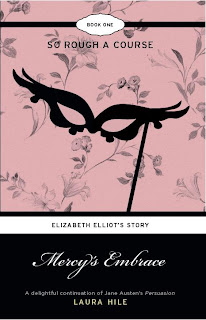 From the Publisher:
Elizabeth Elliot is as beautiful as ever, yet no gentleman of proper stature has requested her hand. Lady Russell claims she is too particular, but  begs to differ. She is not about to settle for a gentleman of no distinction like her sister Mary. Nor will she follow her heart and marry a commoner with no title but Captain—that was Anne’s mistake. As for romance and the tender stirrings of the heart, why, only a simpleton would fall prey to such foolishness!
But when the proud Miss Elliot encounters a pair of smiling Irish eyes in a most unsuitable man of vulgar connections, she is tempted to change her opinion. Almost.

According to Elizabeth Elliot, a man must possess three qualities in order to be considered eligible: good breeding, good looks, and a good income. As her thirtieth birthday draws near, Elizabeth is beginning to wonder if a man can truly possess all three qualities. Surely two out of three isn’t bad…right? As for matters of the heart, one must be a simpleton, indeed, to believe there is a chance of falling in love with a man who bears all of these.

Beautiful as ever, Elizabeth Elliot is determined to end this Season with a secure future. But to whom does she set her cap? Her very rich, yet disreputable cousin, William Elliot, who will make her the next Lady Elliot? The foolish and portly Mr. Rushworth with his large fortune and extensive estate? She can’t possibly consider clerk Patrick Gill a suitable match, even with his captivating conversation, and ability to make Elizabeth smile while also properly humbling her, for he has no title or money. Well! Elizabeth’s options are dreadfully limited as Bath is teeming with more vulgar seaman like Admiral Patrick McGillvary than eligible bachelors. And Elizabeth refuses to make the same mistake her sisters have in marrying a plain gentleman, who will one day become a country squire, or a common sailor with no title besides Captain.

Similar to Admiral McGillvary, I enjoy the chase. For a man whose smile gets him nearly everything he wants, McGillvary accepts the beautiful Miss Elliot’s snub as a challenge. However, being a lowly sailor with a reputation might not get him the reception he desires with the oh-so-proper Miss Elliot. But never one to back down, McGillvary faces this challenge, though not in the way originally planned.

I thoroughly enjoyed Hile’s writing. Using Austen’s Persuasion as a backdrop, as well as bringing in the infamous Caroline Bingley, gave the story a sense of familiarity, yet with her original characters, writing style, and humor, Hile was able to keep me on my toes for what was to come next.

I am curious to see where Hile takes her readers in Book Two, So Lively A Chase. While Sir Walter is still a narcissist, his financial troubles are even more severe, the stress of which is causing him several health problems. With the help of his new doctor friend, Mr. Savoy, Sir Walter appears to be on the mend. Yet, something just isn’t sitting right with Mr. Savoy. What is he really up to? As for Elizabeth’s matrimonial prospects, will she keep her promise to one man, or end up the victim of her heart?

***GIVEAWAY***
Laura Hile is graciously donating ONE PAPERBACK copy of Mercy's Embrace: So Rough A Course to Leatherbound Reviews to GIVEAWAY! This giveaway is open INTERNATIONALLY!!!
To enter fill out the Rafflecopter form below for each entry! GOOD LUCK!!

a Rafflecopter giveaway
Posted by Unknown at 5:39 AM