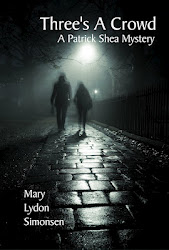 From the Publisher:
In Three’s A Crowd, we are introduced to Patrick Shea, a young detective sergeant with the Hampden Criminal Investigation Department, whose career is being fast-tracked by the Metropolitan Police in London. With an eye to an appointment with a murder investigation team at New Scotland Yard, Shea is doing everything by the book. Unfortunately, his love life is a bit of a mess and gets messier when he learns his former lover, Annie Jameson, has been assaulted on someone else’s patch. Will Shea’s involvement in the under-the-radar investigation of his ex-girlfriend put his career in jeopardy and possibly her life as well?

Celebrated Austenesque author, Mary Lydon Simonsen released a new book, yet it is not a Pride and Prejudice re-imagining. Simonsen hits the ground running in her debut mystery, Three’s A Crowd.

Detective Patrick Shea is the quintessential good guy who is on the fast track to becoming the newest detective on Scotland Yard’s Murder Investigation team. But when his ex-girlfriend becomes the victim of an assault, things get complicated. After learning of Annie’s assault, Patrick Shea makes finding her assailant his mission. However, being back in Annie’s presence might not be as easy as Patrick thinks.  While Annie regrets losing Patrick, he is assaulted by memories of their time together. I could feel the sparks between the two still, however, are they going to be able to overcome their broken past and start anew? Will he lose his chance at promotion for interfering with a case from a different patch?

Those who enjoy Simonsen’s humor will be pleased to know it is not lacking here! From the one-liners and humorous banter to factual tidbits tied in, Three’s A Crowd is classic Simonsen writing. Where Simonsen usually exhibits her historical prowess, here she displays her command of British lingo and police operations. The subtle facts interlaced into the plot make the story and characters appear real. It’s through the British dialogue and descriptions that I felt as if I was right there in London with the characters. The language used is so raw and real, making me further believe the characters are real. Even though there were a few terms I didn’t know, readers are provided a glossary of British police terms at the end of the book.

Once the assailant’s interrogation began, I was drawn in even more. As I approached the climax, I was getting antsy, as I usually do at a suspenseful part. The only thing I didn’t like was how easily the assailant surrendered; I wish that person would have put of more of a fight, and the climax would have lasted for a few more pages. Still, this was an enjoyable mystery and set readers up for more of Detective Patrick Shea.

Be on the look out as another Patrick Shea mystery will be released in fall 2012.

***GIVEAWAY***
Mary Simonsen has graciously offered to give away ONE E-BOOK copy of Three's A Crowd to a random commenter.

*Come back Tuesday to watch my vlog for Three's A Crowd*
Posted by Unknown at 6:38 AM