From the Publisher:
Love reigns supreme for our three brave colonels at the start of this epic tale. Colonels Fitzwilliam, Buford, and Brandon are enjoying their courtships and their early married lives with three beloved Jane Austen heroines. The couples lead tranquil lives - until Napoleon escapes from exile. While the military men set out to meet their destiny on the fields of Waterloo, Anne, Caroline, and Marianne defend their hearts against the fear of losing their loved ones. 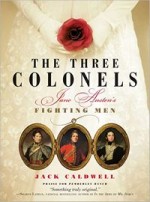 At a time when each couple is getting their foothold on marriage and courting, our three colonels, Brandon, Fitzwilliam and Buford, are called to the Continent to stop Napoleon. With only their love and letters keeping them going, Marianne, Anne and Caroline prepare their hearts for the worst. All together, with the support of family and friends, as well as immense help from the Darcys, our heroines find solace and are able to go about daily life.
I always enjoy it when Austenesque authors develop original characters. This time around, it is Colonel Sir John Buford. *sigh* Caldwell’s authorial tagline is, “It takes a real man to write historical romance.” Well, Mr. Caldwell must be the most manly man out there, because every word to Caroline that came out of Buford’s mouth had me weak in the knees. Don’t get me wrong, Buford still has his demons to slay and isn’t by any means perfect, but the way he treats Caroline is so romantic.
As much as it pains me to say it, I found myself liking Caroline and empathizing with her, just like I did with Jennifer Becton’s Caroline. In The Three Colonels, readers are given a reborn Caroline. While she may have realized people’s value doesn’t come from their social standings, Caroline still contains fire and spunk, and still delivers the cutting remarks for which she is so well-known; however, now those remarks are said in defense of those dear to her. It was also through events towards the end of the novel where Caroline truly proves herself a changed and better person.
Another one of Caldwell’s characters I enjoyed was Anne de Bourgh. Due to some measures on Mrs. Jenkinson’s part, Anne is no longer of a sickly constitution. She is feisty, intelligent, and has a backbone that would make Elizabeth Bennet proud. Not only is Anne changed, but Mr. Collins has changed in some regards as well, and I have to say it was a surprisingly nice change.
Similar to Mary Simonsen, Caldwell cleverly incorporates historical factoids into his work. It was as if I was being educated and entertained simultaneously. These nuggets of information were so well placed. They did not distract from the story, or make it seem boring. Rather, they enhanced the plot, making it richer and realer.

From the weak-in-the-knees romance, well-developed characterization and the historical tidbits, Caldwell gave me a novel I didn’t want to put down.

*On Thursday I talk about Colonel Buford in my vlog. Be sure to check back-- I would love to hear your thoughts!!*
Posted by Unknown at 6:53 AM