Today I welcome author P O Dixon, to Leatherbound Reviews. Recently, I have been devouring Dixon’s books and I am happy to say on Saturday, May 5, Dixon released the Kindle edition of her latest novel, Bewitched, Body and Soul. After reading He Taught Me to Hope, my mind was filled with so many questions I just had to ask P O Dixon. I hope you enjoy this interview!


One of my favorite lines comes from Elizabeth’s rejection of Darcy’s initial proposal.


“From the very beginning, from the first moment I may almost say, of my acquaintance with you, your manners, impressing me with the fullest belief of your arrogance, your conceit, and your selfish disdain of the feelings of others, were such as to form that ground-work of disapprobation, on which succeeding events have built so immoveable a dislike; and I had not known you a month before I felt that you were the last man in the world whom I could ever be prevailed on to marry.”

I always strive to include that scene in my stories, appropriately tweaked to match the storyline. In the case of He Taught Me to Hope, Elizabeth utters those famous words to someone other than Mr. Darcy.
Two other lines I love that I like to include in my adaptations follow:


“There are few people in England, I suppose, who have more true enjoyment of music than myself, or a better natural taste. If I had ever learnt, I should have been a great proficient. And so would Anne, if her health had allowed her to apply.”


“Heaven and earth!—of what are you thinking? Are the shades of Pemberley to be thus polluted?”

Like so many of Lady Catherine’s lines, I find those two hilarious.

I can just imagine the fun in writing Lady Catherine scenes. Speaking of fun, what gave you the idea for weaving together Arthurian legend with Pride and Prejudice? I never would have thought of meshing the two together, but it works rather well. Were you well-versed in Arthurian legend or did you have to do much research for this book? I know some authors visit places they write about to get a feel for the setting and time period. Did you do anything special in your research for He Taught Me to Hope?

When I first thought of writing He Taught Me to Hope, I had another historical adventure in mind— The Three Musketeers. My research indicated that was entirely implausible for the story was written around 1844. I mention providence on numerous occasions in He Taught Me to Hope with good reason. I consider it a matter of divine intervention that my initial plans fell through. I had a lot of fun weaving the Arthurian legend into the story. I was only vaguely familiar with the details from the legend of King Arthur, so I had to do a bit of research to tie the two tales together.

Well, I would have thought you a great proficient in Arthurian legend from how well you tied the two tales together. You must be taking lessons from Lady C.! Now, I see you have boards on Pinterest for your books. I love the picture you have pinned for Camelot/Rosings. It fits perfectly with your description of Rosings. Tell me, do you find pictures for inspiration while you are plotting and writing? I know some authors find it helps.


Often, I find inspiration for my books from certain pictures and songs. This is but one of the reasons I love Pinterest so much. Not only do I think it is an excellent place to organize inspirational photos, now readers have easy access to the pictures, as well.

Since I have a clear picture of Mr. Darcy in my mind, there is no shortage of visual depictions to spur my muse. The same applies to Elizabeth. I like to think I enjoyed another act of providence, as regards He Taught Me to Hope. I had no idea that there was a King Arthur 2004 film until an angel, who is adored by many in the Jane Austen Fan Fiction community, shared pictures from the movie on the online board where I posted the story serially. Every week, she shared a different one. A perfect picture of Kiera Knightly, as Lady Guinevere holding a bow and arrow, was the catalyst for Darcy’s shooting lesson. The most adorable photo was the one she shared as a depiction of young Ben. Fans lovingly refer to the precocious lad as ‘Bencelot.’ Thanks, Gayle!


Oh, I just adored Darcy’s shooting lesson (what a hot, yet chaste scene, as I mention in my review). I would gladly study under his tutelage any day, lucky Elizabeth. And I think it is only appropriate that your fans came up with the name, “Bencelot!” I couldn’t think of a better name for him.
(See P.O. Dixon’s boards for each novel on Pinterest).
In HTMTH, Mr. Bennet is stricter and Jane is less forgiving. What gave you the idea to portray them in this light? I found it fit well with the story.

Elizabeth was only seventeen at the time of her marriage in this adaptation. Mr. Bennet objected to the fact that her betrothed was too young to contemplate marriage. The backstory for Mr. Bennet, in this case, is that he gave up his carefree years too soon before marrying and raising a family. He suffers a bit of regret. That being the case, it explains his indifference towards Mrs. Bennet and his general disrespect. He projects these feelings onto the young man. He does not want his favorite daughter to wake up one day and find herself in such a marriage. His harshness towards Elizabeth after she defies his wishes is a reflection of a father who has lost his ability to control the life of his favorite child. He readily accepts her back into the fold when he thinks he has a chance to reassert his influence over her decisions.

When the elder Mr. Collins arrived at Longbourn with the intention of choosing a bride from among his fair cousins, Jane would have gladly accepted him. He is a decent, respectable man and a devoted father. His handsome looks and intelligence add to his estimable traits. Jane feels slighted by his obvious preference for Elizabeth when they first meet, which manifests itself in unspoken resentment. Months later, after having given up on the possibility of a future with Bingley, she readily accepts Mr. Collins’s courtship. All the reasons that rendered him a poor match for Elizabeth—issues that dealt the final blow to her tolerance for Mr. Collins—would never have come to bear in his relationship with Jane.

You do such a great job developing characters and seeing all facets, like what you did with Mr. B and Jane. Can you tell your anxious readers something about your newest release, Bewitched, Body and Soul? 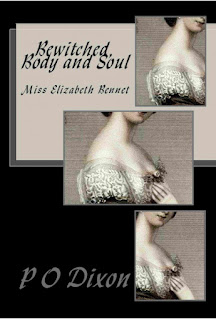 Bewitched, Body and Soul is a story of Elizabeth’s determination to correct the injustice against Jane as a result of Caroline Bingley’s interference. Everything that happens in canon up to that point serves as the backdrop of this adaptation. Here’s where the story deviates. Elizabeth goes to town instead of Jane. Mrs. Bennet, having washed her hands of finding a husband for her second eldest daughter after her rejection of Mr. Collins, insists upon Elizabeth’s acceptance of the Gardiners’ invitation to town. She thinks Elizabeth might stand a chance of finding a husband in London. Elizabeth has her own reasons—to clear up the misunderstanding surrounding Bingley’s hasty departure from Netherfield Park and to convince him of Jane’s true feelings.

Two original characters are introduced in this story. The first is Darcy’s close friend, Lord Trevor Helmsley, the Earl of Latham. The second is Lady Gwendolen Helmsley, Lord Latham’s sister. Beautiful, accomplished, and caring, her greatest ambition is to be the next mistress of Pemberley.

Oh, my goodness! This story sounds just as intriguing as the others. I cannot wait to read it! And I just love the two new characters. I have a feeling there will be some “issues” between Elizabeth and Lady Gwendolen.

Indeed. Of course, the odds are in Elizabeth’s favour. I’m glad you are intrigued. I am also glad for this chance to interview on Leatherbound Reviews. Congratulations on your successful launch! I look forward to reading many exciting reviews and tuning into your vlogs.


It truly was my pleasure and honor having you, P.O.!

Stay tuned to P.O. Dixon’s website and blog to hear the latest news and reviews for Bewitched, Body and Soul!


P.O. Dixon is the author of To Have His Cake and Eat it Too, What He Would not Do, He Taught Me to Hope, Still a Young man, and her newly released, Bewitched, Body and Soul.

P O Dixon is graciously giving away ONE Kindle edition copy of Bewitched, Body and Soul in celebration of its recent release!! To enter, simply leave a comment about the interview or tell us what you find interesting or like about Dixon’s writing. (Since the giveaway is a Kindle copy, the giveaway is open worldwide). Winner will be announced Friday, May 18! Check back to see if you won! Good Luck!!

To enter, leave a comment for any of the following: (Make sure to leave a separate comment for each entry).
Thank you so much P O Dixon for the amazing giveaway!! Again, the winner will be announced Friday, May 18! Good Luck!
Posted by Unknown at 7:27 AM

Email ThisBlogThis!Share to TwitterShare to FacebookShare to Pinterest
Labels: Bewitched Body and Soul, Giveaway, He Taught Me to Hope, Interview, P O Dixon