Author Lauren Smith is releasing her first Regency novel, Wicked Designs, the first book in her League of Rogues series. While Wicked Designs will not be released until January 7, it is never too early to discover a new read or swoon-worthy hero.
So without further ado, let's begin my interview with Ms. Smith.

The Regency era has always held a special place in my heart. It was a time of manners and social niceties that have long since been abandoned in the way of the modern world. Yet at the same time, there’s room for rogues, rakes, and wild adventures that push the limits of society’s acceptance and I love writing along that fine line. It’s where all the fun happens!

Tell us about these five handsome, powerful rogues of yours.

The League Line up- Godric, Lucien, Cedric, Ashton, Charles and Jonathan (yes there will be a sixth member but he’s a secret until the end of book 1). They are not your average group of Regency gentleman. Sure they are titled and handsome and quite wicked…but what makes the League of Rogues different is that they were brought together by an event in their past that forged an unbreakable bond. Complete strangers to each other one, they are forced to unite against a common foe to save Charles (one of the future league members) from certain death. That near tragedy made them blood brothers. The fun part is that now many years later, they continue to delight London’s gossipers with wicked deeds (especially in the bedroom).

I love Wicked Designs' premise. Can you say sa-woon? What gave you the idea for the League of Rogues and Emily being sold as chattel by her uncle?

I always thought the idea of a botched abduction would be fun. What could be more entertaining than five grown men in their early thirties trying to catch a spry, feisty little 18 year old debutante who is much more intelligent and brave than they expected? I wanted to write a story that showed Emily as a young woman, naïve and innocent, but not stupid, as she took on the daunting task of Godric to fall in love. Throw in a debt-laden uncle and a scheming business partner who isn’t the only one with wicked designs towards Emily and I had got one heck of story rambling about in my head determined to make it to the page.

Your hero in Wicked Designs, Godric, the Duke of Essex, is described as brooding, seductive, and bewitching. Was he fun to write?

Absolutely! Godric came to me fully formed, brooding and tortured and impossibly seductive. How can  a writer resist such a hero when he flashes his green at her? I have always loved reading stories where a hero is redeemed by love and overcomes the pain of his past. Godric lost his mother when he was a boy and his father, a once loving man, turned abusive, lashing out at Godric whenever possible. This made Godric convinced that when people loved him, they only had more power to hurt him. I felt that he was the perfect hero for a woman like Emily who has faith that love can solve anything and save anyone. Their love story is about the power of having faith in yourself and in what your love can do for others. While it is a not an inspirational story (it’s far too sexy for that, trust me *wink), I hope that readers will find themselves feeling inspired, and also a little flushed.

What kind of heroes and heroines do you prefer writing?

I tend to like writing about heroes and heroines who aren’t afraid to live their lives as they wish. I don’t adhere to the more traditional regency guidelines. I believe that woman, no matter what time era, were brave and sensible and intelligent. I want readers to fall in love with my innocent heroines, my jaded heroines, my brave heroes, my wicked heroes. I hope all of my characters encompass many traits that are present in men and woman, but above all I want to write heroes and heroines who are relatable to every reader, not just a few people. If a reader can get into the trenches and be willing to fight alongside my characters every step of the way in their battles in the book, then I have written something I can be proud of.

So, dear readers, interested in Godric and Emily's story? I know this is one that will be topping my TBR list! 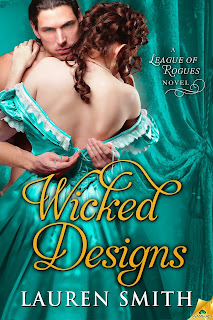 From the Publisher:
The League of Rogues takes what they want—but have they taken on too much?

For too long Miss Emily Parr has been subject to the whims of her indebted uncle and the lecherous advances of his repulsive business partner. Her plan to be done with dominating men forever is simple—find herself a kind husband who will leave her to her books.

It seems an easy enough plan, until she is unexpectedly abducted by an incorrigible duke who hides a wounded spirit behind flashing green eyes.

Godric St. Laurent, Duke of Essex, spends countless nights at the club with his four best friends, and relishes the rakish reputation society has branded him with. He has no plans to marry anytime soon—if ever. But when he kidnaps an embezzler’s niece, the difficult debutante’s blend of sweetness and sharp tongue make him desperate for the one thing he swears he never wanted: love.

Yet as they surrender to passion, danger lurks in Godric’s shadowed past, waiting for him to drop his guard—and rob him of the woman he can’t live without.

Warning: This novel includes a lady who refuses to stay kidnapped, a devilish duke with a dark past, and an assortment of charming rogues who have no idea what they’ve gotten themselves into.

About the author:
Lauren Smith is an attorney by day, author by night, who pens adventurous and edgy romance stories by the light of her smart phone flashlight app. She’s a native Oklahoman who lives with her three pets—a feisty chinchilla, sophisticated cat and dapper little schnauzer. She's won multiple awards in several romance subgenres including being an Amazon.com Breakthrough Novel Award Quarter-Finalist and a Semi-Finalist for the Mary Wollstonecraft Shelley Award.