Frolic and Play: His Uncle's Favorite by Lory Lilian

Today's excerpt for Leatherbound Review's Frolic and Play series comes from Lory Lilian's newest novel, His Uncle's Favorite. Prior to this scene, Georgiana Darcy invited Elizabeth Bennet on a sleigh ride. In their travels, they happen upon the Darcy townhouse when Georgiana has the clever idea of stopping by home to see if her brother is home and would like to join them! What a coincidence that Mr. Darcy was home and was agreeable to join them. Here they are in the sleigh. Enjoy! 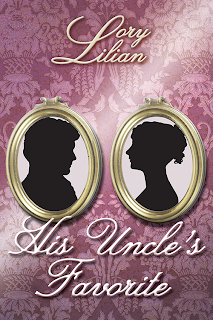 They had been in the sleigh for more than an hour, and Fitzwilliam Darcy still could not believe he was there — nor understand why.

When Georgiana informed him of their plan, he approved it without hesitation, but he never considered he might join them. And yet, here he was! Perhaps he was still tired after the previous night’s party and could not think properly. It was true that he had barely slept; as soon as he arrived home, he enjoyed a couple of glasses of brandy to put his thoughts in order. The only result had been an increased disorder of his mind and a restless night.

He had left Netherfield after the disastrous ball and after a most enchanting dance with her. He had left — first of all — in Bingley’s best interest, but he had been content and relieved to do so. He had wisely put many miles between him and her sparkling eyes.

And there she was — right in his face — cuddled under blankets, laughing and chatting with Georgiana, her cheeks red from cold, her hair partially escaped from her bonnet, wet and frozen from the snow, her eyes sparkling and laughing — at him.

When he first heard her voice in his house, he thought he was imagining things. He exited his office and saw her in the middle of the room, and then he could barely remember what had happened. Georgiana invited him to join them and Elizabeth had asked him last night at the party whether he would accompany them on the ride. What more clear indication could he expect? How could he refuse them both? He accepted because he had to.

She had been in town for only a week, and Georgiana was charmed by her. They were already calling each by their given names. And, without much consideration, Georgiana had just invited Miss Elizabeth Bennet to Pemberley! What should he do?

He must have the strength to make a decision – for he knew he would be in real danger if he continued to see her so often. But could this be avoided? Her aunt was a close friend of his uncle’s family and his sister seemed eager to gain her friendship. What should he do?

“Oliver, stop, please,” Georgiana suddenly said, and he startled, looking around. “Oh, this is beautiful!” the girl exclaimed.

They were near a small forest on a hill. Everything was completely white around them; it was no longer snowing, and no breeze of wind disturbed the trees. Everything seemed frozen. The horses stopped, and both Elizabeth and Georgiana freed themselves from the blankets and stepped out into the snow, which was higher than their ankles. Darcy knew he should demand they return, but their joy was so infectious that it corrupted him, too.

The time passed unnoticed; eventually, he stepped out of the sleigh, and instantly he felt the snow invading his boots. He could imagine how frozen their feet must be in their thin shoes. And there was still a long ride back home, so he asked them to re-enter the sleigh.

Georgiana and Elizabeth returned and resumed their seats in the sleigh, but their appearance was a disaster. Their shoes were heavy with snow, and their dresses looked positively frozen. They tried to shake the snow from their shoes and gowns but with little success, as their hands were obviously frozen too. This failure made Darcy cast them a disapproving look, while they fought to hide their laughter under obedient glances.

At Darcy’s request, the sleigh resumed its ride. “If you remain like that until we arrive home, you will both catch a very dangerous cold, ladies.”

“Oh, let us hope not, sir. I would be deeply saddened if Georgiana should suffer because of her generosity. It was my fault; I unwisely suggested that—”

“Miss Bennet, I have seen Georgiana so many times in similar situations, that I doubt it was your fault at all. But neither of you can stay like this any longer.”

To Elizabeth’s shock, he bent to his knees, and with his gloved hands, he brushed the snow from Georgiana’s bonnet, from her gown and shoes, and then, without hesitation, he did the same for Elizabeth. She forgot to breathe for some moments. This could not be happening!

He finally resumed his seat, removed his gloves and reached toward them, demanding: “Now your gloves, please, ladies!” Elizabeth did not move, incredulous at the meaning of his words. Georgiana, however, stretched her hands to him, and he pulled her gloves then rubbed her hands to warm them and covered her with the blankets.

“William, I cannot believe you still treat me like a child.” Georgiana laughed, but he raised his eyebrow in obvious reproach.

“My dear, apparently not much has changed in this respect since you were a child, and I still wish you to avoid catching a cold. So the treatment must be similar.”

Then he turned to Elizabeth, waiting. She stared at him, her eyes and mouth wide open. Surely, he could not presume to …

Without warning, he took her hands and removed her gloves, then covered them in his warm palms. Her hands were still, not daring to move; he looked at her, and their gazes locked for a moment. He continued to hold her hands, then clasped and pressed them together; her cold hands wrapped in his, taking warmth from them. She could not say how much time had passed, but she was certain it was improperly long. Eventually he released her hands, and as he did with Georgiana, he covered her in a blanket.
******


What do you think? Things got a bit steamy on that carriage ride, huh?

Book Blurb:
His Uncle’s Favorite: A Pride and Prejudice tale that takes a divergent path after the Netherfield ball and its residents’ hasty departure.
Shortly after Christmas, their Aunt Gardiner persuades Jane and Elizabeth Bennet to spend time with her in London. There, the girls encounter familiar faces and intriguing new acquaintances. As fate would have it, their aunt’s Gracechurch Street home is frequented by intimate members of Mr. Darcy’s family, and Elizabeth discovers that she and Darcy’s uncle have more than one favorite in common.
This is a tale of wrong first impressions, mistaken pride and prejudice, rights and wrongs — a divergent but familiar story of the struggle for happiness of Elizabeth Bennet and Fitzwilliam Darcy.