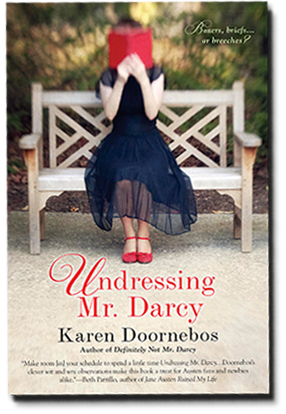 From the publisher:
Taking it off in the name of history…Thirty-five-year-old American social media master Vanessa Roberts lives her thoroughly modern life with aplomb. So when her elderly Jane Austen–centric aunt needs her to take on the public relations for Julian Chancellor, a very private man from England who’s written a book called My Year as Mr. Darcy, Vanessa agrees. But she’s not “excessively diverted,” as Jane Austen would say.Hardbound books, teacups, and quill pens fly in the face of her e-reader, coffee, and smartphone……Until she sees Julian take his tight breeches off for his Undressing Mr. Darcy show, an educational “striptease” down to his drawers to promote his book and help save his crumbling estate. The public relations expert suddenly realizes things have gotten…personal. But can this old-fashioned man claim her heart without so much as a GPS? It will take three festivals filled with Austen fans, a trip to England, an old frenemy, and a flirtatious pirate re-enactor to find out…

Review:
In Undressing Mr. Darcy, author Karen Doornebos gives her readers a tale sure to knock any lady’s slippers off, Janeite or not.

When Vanessa Roberts does her Aunt Ella a favor by working as Mr. Darcy’s, a.k.a. Julian Chancellor, PR rep for his book tour supporting his novel, My Year as Mr. Darcy, she doesn’t realize what she is getting in to.

A social-network junkie, Vanessa cannot wrap her mind around how someone could spend an entire year without using a cell phone, the Internet, or even a ballpoint pen. She can’t go five minutes. Fascinated by the enigma that is before her, Vanessa slowly sees herself falling under Mr. Darcy’s spell. Can a girl leave a life of hashtags and cyberspace for a life of quill pens and stationary?

Having not encountered a woman as forward and vivacious as Vanessa, Julain Chancellor also appears to be falling hard. It worked for the original Mr. Darcy, why not him? Plus, Julian knows he can make any girl swoon with his tight, flesh-colored breeches, hessian boots, and cravat. I was even falling for him with his arrogance and British charm. But what will happen when his book tour is over and he heads back across the pond?

Karen Doorenbos provides her readers with a fun-loving cast of characters. The combination of Vanessa, her new friend, Sherry, and her frenemy, Lexi, creates one sexy, humorous trifecta. Thrown into the mix is treasure hunter and Jack Sparrow impersonator, Chase MacClane. While I swooned over Chase’s gentlemanly ways, I couldn’t decide if he was a Wickham or a genuine gentleman. Doornebos had me guessing until near the end.

In addition to this new cast, Doornebos also brings back Chloe Parker and Henry Wrightman for a memorable cameo appearance.

It is Doornebos’s memorable and complex characters that add a deeper layer to the entertaining, sex, and lighthearted plot.  Having been one to never understand why so many people are obsessed with some spinster author who wrote more 200 years ago and why they treat her fictitious characters as if they were real people, Vanessa surprises herself when she learns there is much to be taken away from Jane Austen’s novels. Vanessa has gone through life full throttle, not taking am moment to pause or look back. It isn’t until she meets Mr. Darcy and finally reads Austen that she begins questioning her way of doing life. Being a dynamic character, Vanessa goes from living a life behind the media screen of social networking sites and online dating to longing to share herself and life’s events with someone…in person.

While I was wrapped up in Vannesa’s story and her changes, there were times I wanted to shake her, but I find that is often the case when I am completely absorbed in a book and feel as if I am an just another supporting character. Kudos to Ms. Doornebos for transporting me into her book and to Chicago, Louisville, London, and Bath. If I didn’t have Austen fever, I sure do now.

If you enjoyed Definitely Mr. Darcy, you must definitely Undress Mr. Darcy!

Berkley Books is giving away TWO (2) paperback copies of Undressing Mr. Darcy!! This is one giveaway you want to win. The book is a must read!
To enter, comment on this blog post and fill out the Rafflecopter form.