As many of you know, along with reviewing novels, I also edit manuscripts. In addition to a newborn keeping me busy these past few months, I have also been kept glued to my computer editing manuscripts, much to the neglect of my housework. No loss there, right? With all of that going on, I have not had as much time as I would like to review novels. While I hate not being able to give you reviews, I have found a solution! My dear friend Heather Head has stepped in as a guest reviewer on Leatherbound Reviews. So without further ado, enjoy her review of Tess Quinn's novel Pride Revisited! 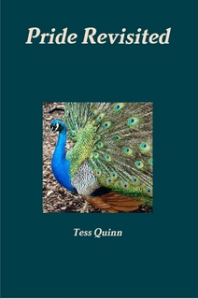 Tess Quinn’s Pride Revisited is a treat for anyone who wonders how a bystander might observe the unfolding relationship between Mr. Darcy and Elizabeth Bennet. In this series of short stories, Quinn guides us through different events in our favorite love story through the eyes of those whose voices are often little heard.

The first story, “A Dose of Sardines Is Just the Thing,” begins at Netherfield during Jane Bennet’s illness, when Caroline Bingley, hoping to arrange a little alone time for herself and Mr. Darcy, suggests a rainy-day game of Sardines. Unfortunately for that lady, she is outwitted (not for the first time, I am sure) by Elizabeth, who finds herself grudgingly in exactly the place Miss Bingley had imagined for herself. The story ends with a confused Elizabeth and a rather disappointed Darcy, but picks up in the next story, “Water Pump.” This story has two variations. The first allows us into the mind of Mr. Darcy, and the second makes us privy to the surprising thoughts of someone in a position of service, watching the goings-on of Netherfield with an observant eye and seeing what the people so closely involved cannot see for themselves.

We know that Charles Bingley is an affable man and easily influenced by others. But, what does he think about when left to think for himself? Most often, my personal answer would likely be, “nothing.” Apparently, Bingley is not so susceptible to the power of suggestion when it comes to his friend’s sister. Georgiana and Bingley play integral parts in that missing span of time, when Darcy is nowhere to be seen and Elizabeth goes on about her business. We know what happened in the Bennet household during those months, but what of the Darcys?

Pride Revisited lets us in to the Darcy family, allowing us to watch Georgiana’s relationship with her brother grow from parent/child, to brother/sister, to friends as she emerges from her disappointment with Wickham, strong and mature enough to encourage her brother in his own heart woes.

After a quick trip through their courtship, we see Darcy and Elizabeth settled into their married life, celebrating and loving one another at Pemberley.
As an added treat, Quinn has even provided a modern adaptation of the Wickham, Elizabeth, Darcy debacle that transpires before the proposal at Hunsford. If I am being honest, I usually do not like modern adaptations, as I fancy myself a member of pre-twentieth century society, but Ms. Quinn so eloquently and accurately captured my own thoughts and emotions in the first two paragraphs of, “Worst Impressions,” that she reeled me in. I was not disappointed.

If I had one criticism, it is that I could have done without the anecdotal introductions to each story. But, with such a minor censure as that, I would have to recommend Pride Revisited to anyone who loves the Darcy family, or who has ever wondered what those on the periphery were thinking.

About Heather Head:
I am a married mom of two who lives in Birmingham, AL. I am a former high school English teacher/reading specialist who is determined to make the art of reading enjoyable for the next generation. I love books in general, and find it almost impossible not to indulge in a good historical fiction.