Under the Mistletoe Day 8: A Darcy Christmas by Sharon Lathan + GIVEAWAY!!

Sharon Lathan gives readers another delightful mistletoe kissing scene between Darcy and Elizabeth, though I think this one might be a little more special as Elizabeth gives her family one of the best Christmas presents ever. I hope you find this excerpt as endearing as I do.

From the novella, A Darcy Christmas, chapter titled “Christmas Addition” by Sharon Lathan 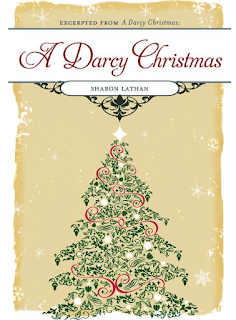 “There,” Elizabeth Darcy declared, sitting back on her heels. “It looks beautiful.”

Darcy paused to survey the scene, including his gorgeous wife in the tableau, and had to agree. The flickering glow from the perpetually burning Yule log cast a ruddy sheen over the array of colorful tissue and rag-paper wrapped packages stacked on the plush velvet drape spread nearby. It was the perfect corner with the window above kept partially uncloaked so any starlight or moonbeams could enter in. The fire added to the illumination and the holiday atmosphere was further accented by the bundles of mistletoe and holly branches strategically hanging over everything.

The newest acquisition was a three-foot tall Father Christmas carved and painted by Dr. George Darcy that sat on a small shelf above. It was as if the historical Yuletide visitor was watching over the collection, his mischievous grin casting some doubt on his intentions!

They tarried in the parlor to enjoy the holiday scene, comfortable atop a layer of cushions, and snuggled under a fire-warmed blanket before the burning log. Darcy caressed Lizzy’s abdomen. Approximately two or three weeks away from the anticipated birth, her belly was smaller than in previous pregnancies. Lizzy was carrying this baby completely different than she had with their two boys, joking with some irritation that she resembled a pear. Darcy thought it was wonderful, convinced that the pronounced deviations meant it had to be a girl! Lizzy thought that was ridiculous.

Finally, as the mantel clock chimed one o’clock, they rose to return to their bedchamber. They knew they would be woken in a mere four or five hours, Alexander catapulting onto his father with all the exuberance of a youngster anxious to open his presents.

Darcy halted at the top of the Grand Staircase, pulling his wife into a firm embrace where they stood just under the enormous kissing bough that was yearly redecorated with fresh greenery and polished until gleaming.

“One kiss under the Darcy bough,” he whispered, lowering his mouth to brush over hers. “It shall bring us luck.”

“You are a superstitious man, Mr. Darcy.”

“Or simply grasping onto another opportunity to kiss my stunning wife.”

Who knows how long the kiss may have continued if not for the strange popping sensation Lizzy felt from the recesses of her loins that was followed by a gush of warm fluid streaming down her thighs into a puddle on the marble floor. She gasped, jerking out of Darcy’s arms, and exclaimed a shrill, “Oh my!”

Darcy was perplexed for about two seconds before processing the information and meeting his wife’s embarrassed and startled eyes. He was jubilant! His eyes sparkled, the grin spreading over his face reaching from ear to ear. “A Christmas baby! Ha! Once again, my dearest, I am immeasurably thrilled that you never do anything as it is expected of you!”

And with a booming laugh he swept her into his arms.

“The boys will be disappointed that I ruined their Christmas!”

“Nonsense. They will consider their sister the best gift of all.”

And he was correct, on both counts. The boys were overjoyed to greet their newest sibling later that afternoon, loving her wholeheartedly and forever, even if Noella Holly Jane Darcy would prove in time to be puckish, high-spirited, and fiery as often as she was lovable, generous, and jocose.


******
I'd love to hear your thoughts on the excerpt. And I think the cover is absolutely beautiful!

In the Christmas spirit, Sharon Lathan has kindly offered ONE ebook copy of A Darcy Christmas to one lucky commenter! (Open Internationally) To enter, please leave a comment and fill out the Rafflecopter form! Winner will be announced Friday, December 21! Good luck! =)
a Rafflecopter giveaway 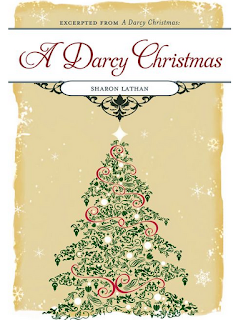 From a beloved author of popular Jane Austen sequels come a heart-warming tale of Elizabeth and Darcy at Christmas, sure to delight both Jane Austen and Regency romance fans...

Based on the Darcy Saga series by Sharon Lathan, this novella takes the reader down the passage of time with ten individual snippets of the evolving Darcy family celebrating. Beginning on the Christmas Eve after meeting Lizzy Bennet, Mr. Darcy is a man tortured by visions and emotions he is unable - or unwilling - to deal with. Thereafter follows a succession of Christmas Eves and Days with Mr. Darcy as a happily married man surrounded by his wife and an ever-increasing family, giving glimpses of their future. 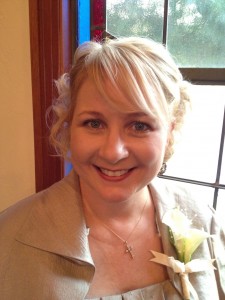 Author Bio:
Sharon Lathan is a native Californian currently residing amid corn, cotton, and cows in the sunny San Joaquin Valley. She divides her time between being a homemaker, nurturing her own Mr. Darcy and two children, and working as a registered nurse in a Neonatal ICU. Throw in the cat, dog, and a ton of fish to complete the picture.
Sharon’s passion for Pride and Prejudice and then all things Jane began in 2005 upon seeing the movie version starring Kiera Knightley and Matthew Macfadyen. The burning desire to know what happened next sent her on a quest through online fanfiction and then ultimately into writing the story herself when she never found a sequel precisely matching her happily-ever-after vision. Now she has five complete novels, a novella, and a companion novel recounting Georgiana Darcy’s love story to her credit! Will it ever stop? Who knows, but she is having a fabulous time spinning the Darcy Saga!

Email ThisBlogThis!Share to TwitterShare to FacebookShare to Pinterest
Labels: A Darcy Christmas, Giveaway, Sharon Lathan, Under the Mistletoe