Today I get to take part in ABG Reads Book Tour with my review for The Viscount's Vow by Collette Cameron. It is a pleasure to be a part of this tour. You can also read Ms. Cameron's guest post for Leatherbound Reviews here. 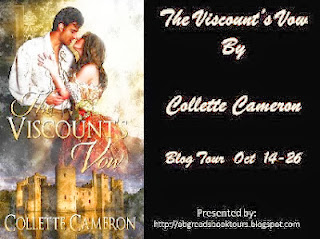 Review:
Vengeance isn’t sweet, but what if it can take one on an unexpected journey?

Determined to avenge his brother’s and father’s deaths, Lord Ian Warrick sets for London with one purpose: ruin the light skirt whose actions lead to their deaths. All is going according to plan, until Evangeline Caruthers, said light skirt, needs help. Found in a most compromising, though innocent, position, there is only one solution to squelch the wagging tongues: marriage. How will Lord Warrick survive a forced marriage to the very lady whom he was set on destroying?

With her striking Roma beauty and her simple ways, Vangie Caruthers doesn’t quite fit in amongst the haut ton. Following her Roma herritage, Vangie is determined to marry for love or not at all. However, those plans are dashed when she is forced to marry Lord Warrick, a complete stranger. In true Roma fashion, Vangie is intent on making the best of this undesirable situation. But when she discovers the real reasons behind Ian’s presence in London and his speculation behind his brother’s death, will she be able to trust this man she married?

After a rocky beginning, Ian vows he will not hurt Vangie again, but as trouble and adversity abound, will Ian be able to keep his word? Cameron combines just enough angst and misunderstandings with romance and speculation, leading me to read this book in just two sittings; I simply had to know how the conflicts were resolved. And there is where the book fell short for me.

After the excellent ride Cameron took me on, I was disappointed when the resolution came to such a quick and convenient closure. I would have liked to have seen that last scene of the climax played out more. The resolution was just too sudden for me.

The only other issue I had with the book is Vangie’s frequent use of “faith.” Good portions of her sentences begin with “faith.” “Faith, he is even handsomer up close.” “Faith, whatever is going on?” “Faith, she’d become mistrustful.” While I found this repetitious, it might not bother other readers.

I have never before read a book with Gypsies in it. Learning about their culture and ways was rather interesting. Colette Cameron’s research in to the Roma culture is evident as she cleverly weaves their ways into the Regency period. I now have a great desire to see the Romani people first hand and get a glimpse at their easy-going lifestyle.

If you are looking for a Regency read with romance and a bit of suspense, I suggest trying The Viscount’s Vow. 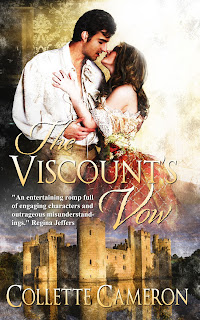 From the publisher:
Amidst murder and betrayal, destiny and hearts collide when scandal forces a nobleman and a gypsy to marry in this Regency Romance.

Half Romani, half English noblewoman, Evangeline Caruthers is the last woman in England Ian Hamilton, the Viscount Warrick, could ever love—an immoral wanton responsible for his brother’s and father’s deaths. She thinks he’s a foul-tempered blackguard, who after setting out to cause her downfall, finds himself forced to marry her—snared in the trap of his own making.

When Vangie learns the marriage ceremony itself may have been a ruse, she flees to her gypsy relatives, declaring herself divorced from Ian under Romani law. He pursues her to the gypsy encampment, and when the handsome gypsy king offers to take Ian’s place in Vangie’s bed, jealousy stirs hot and dangerous.

At last, under a balmy starlit sky, Ian and Vangie breech the chasm separating them. Peril lurks though. Ian’s the last in his line, and his stepmother intends to dispose of the newlyweds so her daughter can inherit his estate. Only by trusting each other can they overcome scandal and murderous betrayal.