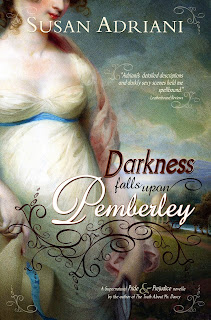 From the publisher:
After an unspeakable tragedy befalls his sister at Ramsgate, Fitzwilliam Darcy of Pemberley finds himself in Hertfordshire. There, he meets the alluring Elizabeth Bennet, whose dark eyes, engaging wit, and intelligent discourse thoroughly enchant him.A taciturn gentleman by nature, Darcy prefers to keep his emotions and desires on a tight rein, especially among strangers; but the degree of power Elizabeth wields over him not only tests his inherent ability to restrain himself, but greatly alarms him.Why does this bewitching slip-of-a-woman render his long-practised self-control all but useless? Why does her father appear to dislike him so vehemently from the start? And what mysterious secret is her family intent on keeping from him—Mr. Bennet and her elder sister, Jane, especially—aside from Elizabeth’s whereabouts, that is?But Darcy has a secret of his own; a secret he dreads coming to light for fear that Elizabeth will turn from him with horror and revulsion. But learn of it she does, and Darcy is shocked to discover that her reaction isn’t at all what he expected.

Review:
Author Susan Adriani rides the popular paranormal wave in her novella, Darkness Falls Upon Pemberley. Unlike other Pride and Prejudice paranormal variations where Mr. Darcy is the inflicted character, here it is Elizabeth Bennet who carries around a dark secret. I wasn’t sure how I would like this premise of Elizabeth being the marred soul; however, that was a fleeting apprehension as Adriani quickly had me eating reading out of her hands.

Almost immediately, Darcy and Elizabeth are bewitched with each other. Yet, one cannot fashion a good story without a few impediments. With only Mr. Bennet and Jane aware of Elizabeth’s true nature, Mr. Bennet is quite over protective of his favorite child. In particular, Mr. Bennet is afraid of Elizabeth getting close to anyone, especially the brooding, mortal Mr. Darcy. It will not do if Elizabeth’s secret gets out. What Mr. Bennet doesn’t realize is that Mr. Darcy may be hiding some secrets of his own.

I loved Adriani’s command of the English language in her first novel, The Truth About Mr. Darcy. She brings that out in full-bloom in this novella. The words alone had me under a spell where I was forced to continue reading, held mesmerized. Even from the prologue, Adriani’s word choice is perfect, rich, and exact, and that is maintained throughout the story. Adriani’s carefully selected words, detailed descriptions, and darkly sexy scenes held me spellbound as I read—sensuality washing over me. I was amazed at how a mere conversation or an action as simple as taking a sip of wine could be so sensual and yet innocent at the same time.

As with any Austen-inspired piece I read, I enjoy finding Austen’s lines incorporated in new places or spoken by different characters; I enjoy discovering the differences in scenes as well. What would a Pride and Prejudice variation be without Darcy’s failed proposal? However, here, Elizabeth does not refuse Darcy because of his arrogance, conceit, and selfish distain for the feelings of others. Rather, it is on principle. It would be reprehensible because he is a man, a mortal. It is this decision that brings on a good portion of the struggles Darcy and Elizabeth face. Darcy’s inner struggle is tangible and a real point of contrition for him. Parallel to Austen, Darcy struggles to change, though this time it is not his character that must be changed.

I found it difficult not to have my emotions fully engaged in this story. With the rich and developed words and plot, I was able to empathize with Elizabeth and Darcy as they labored though their differences and be swept away in the passion of it all.

Overall, this is an exceptionally rich and developed Pride and Prejudice paranormal variation. Even Adriani’s character portrayal, specifically Mr. Darcy, Elizabeth, and Mr. Bennet, was original and enjoyable. One cannot have a Darcy and Elizabeth story without a happily ever after. Darkness’s ending is such a sweet touch to this passionate love story.

***GIVEAWAY TIME***
I have exciting news for my followers! Susan Adriani is offering up ONE signed paperback copy of Darkness Falls Upon Pemberley to one lucky commenter.
To enter, please leave a comment on this review. You can comment on the review, say what you think sound interesting about this book, or your thoughts. Have you ever read a paranormal before? Do you like them?
Giveaway ends Wednesday, October 9th!
Best of luck!! =)