Join me today in welcoming author Linda Beutler to Leatherbound Reviews. I am super excited for her novel The Red Chrysanthemum! I have heard of the language of the fan, but the thought of Darcy and Lizzy speaking to each other through the language of flowers I find intriguing.

Thanks, Jakki, for the opportunity to be a guest blogger for Leatherbound Reviews. To get me started, Meryton Press publisher Michele Reed forwarded this quote from an email extending the invitation: "I would love to know more about Linda's floral knowledge, what gave her the idea to make that an integral part of her book, what she enjoyed the most about weaving that into P&P, and such. I think that would interest readers, too." Here’s my answer: 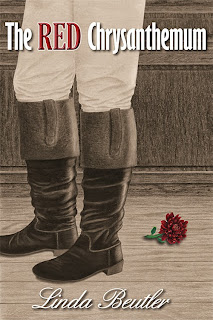 My mother is a cagey woman. As a child, when I approached to help in our garden, she shooed me away. From a young age I intuited time spent in the garden was special to her, and I was making myself a pest when she sought respite in simple tasks like planting, weeding, and pruning. Mom never wanted gardening to be a chore. I looked forward to having a garden, to take pleasure from it as my mother did, and still does.

At the age of five, I was given a three by three foot plot of my own, and the plants, vegetables mostly, were chosen by me and were completely in my care. When my first crop, radishes, was decimated by slugs, a white hot fury was ignited that burns to this day, but I was not dissuaded. It was at that same age I was introduced to the tradition of placing May Day flowers on the porches of our neighbors. At my family’s summer cottage along the Oregon coast, I picked wildflowers from the meadows and the woodlands, displayed in jam jars on the dining table.

If we come forward in time to the 1995 BBC production of Pride and Prejudice, we see, in the very first scenes, Elizabeth Bennet wandering home from a ramble with hands full of wildflowers. I had already fallen in love with Jane Austen’s novels, but this scene resonated and is perhaps the reason I love Jennifer Ehle’s Lizzy more than any other.

Much of the business the actresses portraying the Bennet family in that production were given to do—to save us from many tedious interior scenes of ladies sitting at handwork as they chat—is of a decidedly flowery nature. Jane and Elizabeth are seen gardening. They gather daisies and lavender as they disparage Darcy’s ill-considered remarks after the Meryton assembly. Elizabeth is placing a pitcher of flowers on the dining table as Mr. Collins swoops in to propose. The two eldest Bennet sisters discuss Bingley’s return to Netherfield whilst bundling herbs and flowers for drying in the Longbourn stillroom. Gardens and gardening flow naturally throughout Andrew Davies “light and pleasing” screenplay.

Therein lies the germination of Elizabeth Bennet in The Red Chrysanthemum. She is a creature of the outdoors who, through practice, has learned lively manners and witty conversation to make her an attraction in the drawing rooms of Meryton, but in fact, she would most always rather be abroad in the Longbourn gardens or walking—it is even rumored she runs!—in any local wilderness she can find, wherever sightseeing and visits take her.

As I imagine is true for Elizabeth Bennet, I am primarily a self-taught gardener. Certainly there were garden mentors in the village of adults that raised me, and I took some botany courses in college. In my twenties, as I took on the role of family hostess, for holiday dinners I envisioned the centerpiece before selecting a menu. It was a natural progression to attend floral design school when a career change was wanted as I neared thirty.

More knowledge came from joining the ranks of fellow gardeners in various organizations, particularly the Hardy Plant Society of Oregon. I have made so many friends in the over 20 years of my membership. In a fairly direct way, HPSO led both to my opportunity to teach horticulture and to become a professional garden writer.

Although I have gardened everywhere I ever lived, the eight years spent in the first floor flat of Fred and Lucy Hardiman were particularly formative. With their enlightened sense of community, the Hardimans encouraged all their tenants to take ownership of the garden adjoining their rental properties. As Lucy’s evolution led her to a successful career in garden design, my own took me on an exploration of cutting gardens and a love of old garden roses. Together Lucy and I learned what plants we liked and didn’t (our tastes are far from the same), how to place plants thoughtfully, and how much one really needs to know about plants to grow them well.

Writing has been second nature for me, so to speak, since about the age of ten or twelve. As an English major, I developed a facile ability to sit down and get to it whenever an essay or short story or sonnet was due. I ask a question, and off I go. When I met Brewster Rogerson, retired professor of English and avid clematis collector, everything seemed to coalesce. Gardening and writing and focusing on the genus Clematis combined to take my career in yet another direction, as curator of the Rogerson Clematis Collection.

Perhaps it was random chance that caused me to start reading Jane Austen Fan Fiction, but it pleases me to call it fate. Although I have come late to this particular parade, the more I read, the more I want to try my hand at providing answers Jane Austen never gave us in Pride and Prejudice. I was compelled to write.  One story developed into another, and I found myself with Elizabeth staying her full ten days in Lambton, but needed a way to get her to Pemberley more often than those visits accounted for in the canon. The language of flowers enabled me to grow a story much more unique than it otherwise would have been. And, I had the visual in my head: Elizabeth and Jane Bennet demonstrated a wholly plausible knowledge of plant lore in the 1995 Pride and Prejudice.

If you haven’t watched that version lately, you might want to revisit it before reading The Red Chrysanthemum.

From the publisher:
“Pride and Prejudice” and the language of flowers…
When Fitzwilliam Darcy leaves the inn in Lambton after a tense but fruitful visit with Elizabeth Bennet, her words cultivate his hopes. “Less naturally amiable tempers than Mr. Bingley’s have found ways to forgive you.” Has she excused his flaws of character and errors in judgement? While dining at Pemberley, Elizabeth is confounded when Darcy says of her scent, “Now I find I am more fond of lavender than ever… certainly even more fond of it than I was in, say, April.” Has he pardoned her intemperate assault on his pride?

As her esteem blossoms into love and his desire flourishes into devotion, the meanings of every leaf and petal allow Elizabeth and Darcy to express emotions too vulnerable to speak aloud. But can messages in fronds and leaflets save their fragile hearts when scandalous news arrives from Longbourn?

Perhaps flowers do not always say it best. 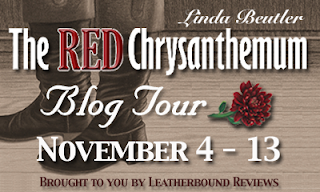