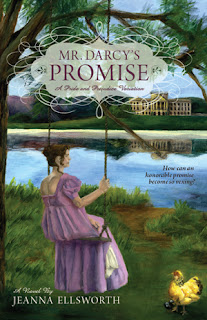 From the Publisher:
Jane Austen’s classic Regency story comes alive again in a tale of pride, prejudice, and a promise. Georgiana Darcy makes her way to Netherfield Park to meet the woman her brother so admires. While at first Georgiana’s presence smooths the course of true love between Elizabeth Bennet and Mr. Darcy, the ghosts of her past appear to wreak havoc on all of them. Unhappily, Elizabeth finds herself placed in the care of the Darcy family at Pemberley. Assuming he knows the cause of Elizabeth’s distress, Mr. Darcy makes a promise on his gentleman’s honor. The promise, although made with good intentions, becomes nearly impossible to keep for Mr. Darcy, and somewhat vexing for Elizabeth. Some promises are made to be broken but will the ever-trustworthy gentleman let go enough to secure Elizabeth’s heart?

Elizabeth Bennet has found herself growing fond of two very different men. One is a gentleman whom she has considered quite haughty since their first meeting some time ago. The other is a new acquaintance who seems to know all the right words to say. Both are walking riddles that she just cannot seem to puzzle out. As each of the men sets out to be the other’s undoing, Elizabeth finds herself caught in the middle and her honor compromised.

At first, Elizabeth is angry about being forced into a loveless marriage to the proud master of Pemberley. But then, she decides that, rather than stew in her own resentment, she will make the best of it and be a cheerful and amiable wife. After all, if they must be married, they might as well have a comfortable friendship. She assumes that Mr. Darcy’s caring gestures are his way of expressing the same sentiment. She still considers him a man full of pride and disdain for those beneath him, until she sees him interacting with his sister and servants. She begins to realize that there is more to him than she first observed, even if she does not see the overwhelming love he has for her.

Mr. Darcy erroneously assumes his new bride’s feelings, as well, and as a result he begins to make promises that will be difficult for a newly married couple to keep. It does not take long for Elizabeth to wish that he was a man of less honor, so that he would break his silly promises and give her the real marriage she has come to hope for.

A few things in this book took me by surprise. In the beginning, I was worried that the true Elizabeth Bennet was going to be reduced to a weepy damsel in distress. I needn’t have been concerned. Of course, she laments that her marriage does not happen the way she had planned, but once her relationship with Mr. Darcy begins to blossom into more than she had ever hoped, the tears cease.

In some other Pride and Prejudice variations, I have seen Mr. Darcy attend Georgiana before Elizabeth, and have even seen him coddle Georgiana as if she were a fragile child instead of a young lady. Here, Ellsworth provides us with a Mr. Darcy who is good to his sister and takes care of her needs, but puts his wife and his marriage first. How refreshing!

On a personal (and perhaps a bit nitpicky) note, I love Colonel Fitzwilliam. He is one of my favorite Pride and Prejudice characters, and I usually enjoy seeing him appear on Darcy’s doorstep. I found him annoying in this book. His humor was just a little too much for me to take, and I wanted to ask him to quiet down.

The Darcy family is, of course, not without struggles. But, in the end, all is as it should be, whether it happened according to plan or not. This was an enjoyable read that kept me engaged from beginning to end.

Jeanna Ellsworth is giving away ONE (1) ebook copy of Mr. Darcy's Promise to one lucky commenter. To enter, leave a comment. Please provide your email address. No email address, no can win. I need to know how to contact you. :) As always, tweet for extra entries.
Also comment on my interview with Jeanna Ellsworth for extra entries!
Winner will be announced Tuesday, September 10!