Reaching Regency Readers…
…from the desk of a Modern Austen-Romance Author!

In my search to discover the key elements of a romance novel, I dug up and poured through several writers’ manuals, tutorials, blog posts, and such and so on. However, they all essentially possessed the same formula: Boy meets girl, boy loses girl, boy and girl reunite, and finally…boy and girl live Happily Ever After! Easy enough, right? WRONG!

Setting, I have discovered, is everything. It’s true! At a recent book signing, an avid Jane Austen Fan Fiction reader declined my novel by proclaiming herself a “Regency purist.” And hey, what’s not to like about the Regency Era? Against a backdrop of strict social order, a certain degree of lawlessness, and fine carriages, you have dashing men donned in riding boots, top hats, and cravats—all very swoon-worthy indeed. In addition, the Regency period was prior to any real concept of womens’ rights, therefore the female protagonist is generally predestined to be defenseless and vulnerable in a patriarchal world. Lastly, sprinkle in the diverse and talented prose of Regency authors, who weave and spin fantastical tales to make each historical novel uniquely their own and voila! It’s chemistry really—good chemistry!

So how does a modern author reach the Regency reader?

One word…Timeless! Again, I rushed to Google and searched. Timeless: not affected by the passage of time or changes in fashion. Timelessness is lasting, enduring, and endless! It is, I believe, the secret ingredient. That one word—Timeless—is the crucial component of Pride and Prejudice and all the great modern classics. No matter how many years, heck, even centuries go by, the characters and stories are as real to readers today as they were then. By all means, as time passes, fashions change and social protocol waxes and wanes, but the heart and soul of people are forever the same—a constant in a sea of transformation. It is for this reason that a girl in the year 2013 can read Jane Austen’s Pride and Prejudice and truly relate to Elizabeth Bennet, a character created more than two centuries ago by a female writer born in the 18th century. Amazing!

It is this very style of timelessness that I have attempted (and hopefully achieved) to convey in my modern-day sequels of Pride and Prejudice. Although the reader is aware that my characters are the 20th century descendants of Darcy and Elizabeth, what makes them interesting and real and human are the same core traits that Ms. Austen gave her menagerie of characters all those many years ago. In a nutshell, I strived to create a story that Ms. Austen herself could relate to. 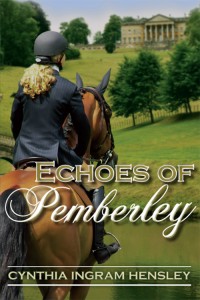 In my first novel, Echoes of Pemberley, I invited readers to come back to Jane Austen’s Pemberley Estate 200 years later and fall in love all over again. We meet there in Derbyshire’s same green hills and valleys a new generation of Darcys with some very familiar dilemmas in romance.

…He [Sean Kelly] had to get her [Catie Darcy] off of his mind and out of his heart. She could never be his, no matter how much he wanted her. ~Echoes of Pemberley

Thankfully, for our star-crossed lovers, as happened in Pride and Prejudice, circumstances were defeated and love prevailed…

…“What is the truth?” she asked, still looking him directly in the eye.
“The truth is that my feelings for you are stronger than I have ever felt for any other human being. The truth is…I love you, Catie Darcy” ~Echoes of Pemberley 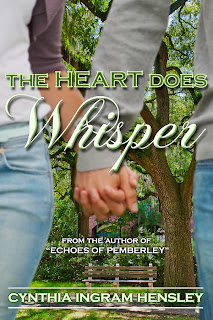 In my newly released novel, The Heart Does Whisper, we catch up with Catie Kelly née Catie Darcy the morning after the wealthy English heiress has wedded the son of a poor Irish horse farmer. We then travel with her on a journey of the heart through the first year of her marriage. In Pride and Prejudice, Jane Austen left us believing that Darcy and Elizabeth had successfully combined their rather different worlds. The question now is…will their modern-day granddaughter be as fortunate?

…Ben [Darcy] looked Sean [Kelly] directly in the eye. “You’re a proud man, Sean. I can appreciate that. However, you mustn’t allow my sister’s money to affect your marriage. You must never hold it against her. It’s easy for a man to marry a woman of less means but much more difficult for a woman.” ~The Heart Does Whisper

So, to conclude, I sure do hope I’ve persuaded a few of you “Regency purists” out there to hop in a time machine, travel forward a couple of centuries, and meet the current progeny of Darcy and Elizabeth’s union. After all, nothing is more timeless than romance. And hey…even us modern authors can create a few swoon-worthy moments!

…Sean laughed as he scooped her off the sofa and cradled her in his arms. “What I want, Mrs. Kelly, is to take me wife upstairs and make love to her.” He leaned down and kissed her. “I want to make love to her passionately.” He kissed her again. “And slowly.” He kissed her again. “And until she has come to such rapture, she’s crying my praises so loud the neighbors hear her.” Sean kissed her once more, slow and meaning it. “Aye?”
“Aye,” Catie croaked in reply.
He smiled at her, that damned wicked gypsy grin that made her stomach flutter, then switched off the porch light with his shoulder, carried her upstairs, and made good on his promises. ~The Heart Does Whisper

Shhhhh…. Cynthia Ingram Hensley is currently writing her first Regency novel! To keep up to date on her progress follow her at:

***GIVEAWAY TIME***
Let's help Cynthia Ingram Hensley celebrate the release of The Heart Does Whisper! To help celebrate, leave a comment on this post for Cynthia and your name will be entered into the drawing. Cynthia is kindly giving away a paperback set of her novels (US ONLY) and one ebook of The Heart Does Whisper (Internationally). Be sure to fill out the Rafflecopter form! Winner will be chose by Rafflecopter! =)
Giveaway ends Thursday, September 19!
Best of luck!! =)
a Rafflecopter giveaway
Posted by Unknown at 5:54 AM