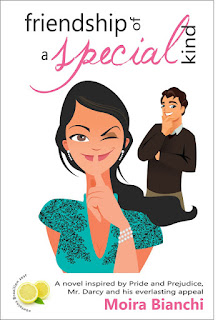 Today I have the pleasure of having author Moira Bianchi, a.k.a Hot Rio Chick, visiting as she promotes her debut novel, Friendship of a Special Kind. Moira has kindly offered up an ebook copy of her debut novel to one lucky winner! Contest open internationally!


Hello Jakki! Thank you so much for the invitation for guest posting on Leatherbound Reviews.  It’s an honor for Friendship of a Special Kind, my first published story, to be listed amongst such nice JAFF books.

Here in Rio de Janeiro, we are all about Carnival nowadays. February is that magic time of the year when we check the 500 street parties’ schedule before getting out of the house in order to choose which ones we’ll follow (intentionally or caught up in a gigantic traffic jam). There are people in costumes and feathered masks everywhere. You can hear samba all the time, and it’s impossible not to have fun. Really! If you’ve never spent Carnival in Rio, you should be planning to. If you already have, you know what I’m talking about, right? 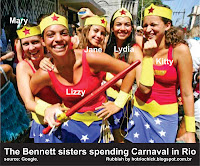 It gets me thinking how Mr. Darcy and Lizzy would choose to enjoy Carnival… Mmmm… The Bennett sisters would form a group of…  wonder women! Mr. Darcy would dress up as… nothing. He would never indulge in such a savage festivity!

As you can see, I’m a hopeless Pride and Prejudice addict. I see Mr. Darcy and Lizzy in everything. Even when my baby son, a three years old Wickham who is always involved in some mischief, is watching the Disney Channel, I get a glimpse of a TV show discussing Austen’s masterpiece (The Suite Life of Zach and Cody, season 33, episode 2). And last Friday, when my hubs and I celebrated our sixteenth anniversary, I was lecturing about ‘The power of P&P fan fiction’ at the Brazilian Jane Austen Society. Yeah, I'm that much of a Darcy lover.

It took me a while to gather courage to write though. I’m a Brazilian architect on the verge of facing the big 40 (OMG!) and always thought that my whole life was of a perpetual Darcy lover, not writer. I always admired how Lizzy was spirited and brave, the way she sent the rich snob away, and then admitted her mistakes. 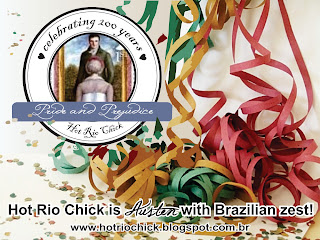 Only after more than six years into Mr. Darcy’s fandom, I found myself in need of putting down on paper a particular scene that looped in my head constantly. It was a hot meeting when Lizzy outsmarted Darcy and he (obviously) fell for her as an aftermath. This scene grew with my confidence and I added a development, and then another, and suddenly Mr. Darcy, Lizzy, and the entire P&P bunch talked to me nonstop.

There are some parts of my book that I honestly don’t recall finding words to express what was happening. It was like I was writing what Lizzy and Darcy were dictating to me. The result of this? A full story, 41 chapters long, lots of fluff and a little angst, fun to read, seasoned with Brazilian zest and hot scenes that tell of Darcy’s struggle to persuade Lizzy Bennett to forget the scars of her destroyed marriage and agree to be his.

Friendship of a Special Kind is not a sequel, but an inspired story- a modern and full of Pride and Prejudice’s standards. I wanted to write a story that I always liked to read when searching a good JAFF. Here, Lizzy is a thirty-two year old widow after Mr. Collins’s demise, and she finds herself scared of another serious relationship fearing another unhappy marriage. Darcy is a thirty eight years old single millionaire who spends his life as a workaholic and dodging the attempts of gold diggers.

When they meet in Meryton, he is attracted to her pleasant figure, unintentional flirtation, and sharp tongue. When Lizzy escapes him, Darcy seeks her out through her friends. Lizzy decides that if a hot guy such as Darcy is making an effort to reach out for her, she could as well have some fun- absolutely no strings attached, no phone numbers, or any other contacts exchange. But she wasn’t counting on Darcy’s will and - believing himself righteous - he hacks into her smart phone and steals all her contacts.
Here is a glimpse of how he reaches out to her after she snobs him.
*****

After their hot afternoon together, Lizzy leaves Darcy in his room and returns to the 4th of July party at Netherfield farm. There she finds her friends and departs hurriedly to deal with a medical emergency at the city, a few miles from Netherfield.
Darcy returns to the party a few minutes later intent on finding Lizzy and enticing her to spend some more hot hours with him, possibly the whole night, but is disappointed to find out she left without saying goodbye - a thing she never planned to do.
The next day he hears gossip about her life and learns that her friend’s father who had a heart attack needed to be transferred from Meryton to Boston, so he decides this is the perfect occasion to make contact again since his texts from the previous day weren’t fruitful at all. He sends her another text message:
---
William Darcy to Lizzy Bennett:
“You need a ride to Boston. Get packed, I’m arriving downtown to pick you up in fifteen.”
…

It was twenty five minutes later when she answered:

So, what are your thoughts on Darcy and Elizabeth with a Brazilian twist?

***Giveaway Time***
In celebration of her debut novel, Moira Bianchi is giving away one (1) ebook copy of Friendship of a Special Kind to one lucky commenter. To enter, simply leave a comment and fill out the Rafflecopter form. OPEN INTERNATIONALLY!! Best of luck!! =)

Connect with  Moira Bianchi
Facebook  | Blog
Read It Now!
Kindle | Nook
Posted by Unknown at 2:40 AM